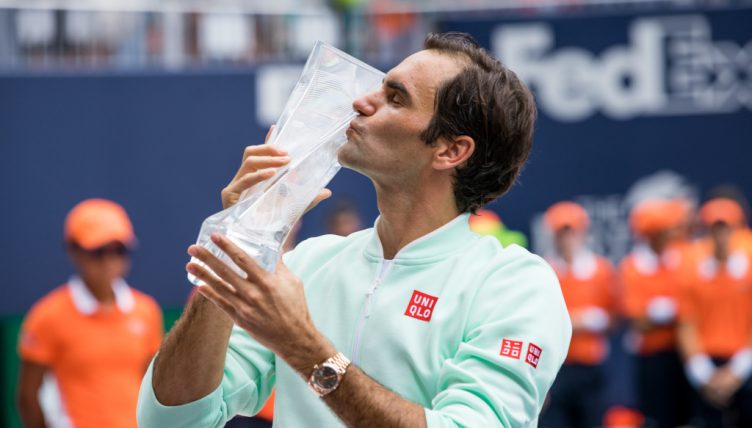 The 2019 campaign has so far been defined by the variety of different winners across both the ATP and WTA Tours, with the exception of Roger Federer’s victories in Dubai and Miami. Now, with the first quarter of the year behind us, Isaac Seelochan looks back on what has been an eventful start to the 2019 tennis season.

Federer’s 101 titles
Aged 37 and after a tough end to last season, things were not looking optimistic at the start of 2019 for Roger Federer.

This was compounded by a tough defeat in the fourth round of the Australian Open to Stephanos Tsitsipas, which John McEnroe, in particular, signalled as “the changing of the guard”.

Fast forward to April and for the third year in a row after the Sunshine Double, Federer sits a top of the year-end rankings after titles in Dubai and Miami, his 100th and 101st titles respectively.

The Swiss is playing his best tennis since the start of 2018 and is now eight titles behind Jimmy Connors’ tally of 109 singles titles. If Federer continues to display the form he has shown in recent weeks he has every chance of breaking the American’s record.

Andreescu announces herself as the next big star
Canadian tennis is enjoying somewhat of a golden generation, with exciting young talents Felix Auger-Aliassime and Denis Shapavalov reaching the latter stages of the Miami Open, whilst on the WTA Tour, Canada now has a player who is amongst the winner’s circle in 2019.

Bianca Andreescu beat several big-name players such as Garbine Muguruza and Elina Svitoloina before being involved in a thrilling contest against former world No 1 Angelique Kerber to win the Indian Wells title in March.

Andreescu then managed to earn another victory over Kerber, this time in the third round of the Miami Open with the defeat appearing to get under the German’s skin, after she muttered “you’re the biggest drama queen ever”, at the end of the match.

Time will tell, whether Andreescu will develop into a future Grand Slam champion but the women’s game certainly has one of the brightest talents in tennis.

“In the middle to the end of December in my training block, I spoke to my team, and I told them ‘I cannot keep doing this’,” he said.

Since then, Murray has had another hip operation after the one he went through in January last year, except this time it was not to necessarily extend his playing career, but to ease the physical pain that he was going through.

Murray has uploaded a video to Instagram in recent days with the caption “it’s a start” showing him hitting tennis balls against a wall, but whether we will see him competing on the court again in 2019 or beyond remains to be seen.

Novak Djokovic’s record seventh Australian Open title
Despite losing early in both Indian Wells and Miami, Djokovic remains the man to beat in the Grand Slams.

His record seventh Australian Open title was won with one of the best performances ever in a Grand Slam final, a 6-3, 6-2, 6-3 annihilation of the world No 2 Rafael Nadal.

The world No 1 has won the last three Grand Slam singles titles, which puts him on the verge of holding all fours majors for the second time in his career if he was to win at Roland Garros in a few months’ time.

Naomi Osaka’s shock coaching split after winning her second Grand Slam
Despite winning both the US Open and the Australian Open, Osaka made the decision to get rid of her coach Sascha Bajin shortly after winning in Melbourne.

“I wouldn’t put success over my happiness,” were the word’s she used to describe the decision.

Early losses in Dubai, Indian Wells and Miami indicate that she is struggling to deal with the aftermath of that split and the attention that is being put on her, after all the success she has had over the past 12 months.

However, she has only recently started working with her new coach Jermaine Jenkins and like any new coaching relationship, they often need time to develop.