Speaking exclusively to Eurosport Germany’s Vocal Athletes podcast, six-time Grand Slam champion Boris Becker reveals he hasn’t ruled out a return to the coaches box and why he left his role as the coach of Novak Djokovic.

Boris Becker… on a possible coaching job in the future

“I wouldn’t rule out the possibility of becoming a coach again. In the current situation, it’s not possible because I’m responsible for the men’s Team Germany. But nothing is eternal. If there are players who interest me, who allow me to coach so and want to be open with me, then that’s something I could definitely consider.

“The problem is that it is very time-consuming. As a coach of Novak Djokovic, I spent 25 to 30 weeks with him. That includes training camps and smaller tournaments. You have to take part in the preparation tournaments and all the pre-season training in winter and spring. That is very time-consuming. I have a family and I have other professional projects that I need to manage. But I don’t want to rule it out completely. Tennis is my great love.”

Boris Becker… on his time as coach of Novak Djokovic

“When I received the first call [from Djokovic’s management], Djokovic had just lost his number one position in the ATP rankings – he was ‘only’ the number two in the world. I have commentated on many games like Wimbledon finals or US Open finals on him as a TV expert and I have always been of a clear opinion. He has taken these reviews to heart. 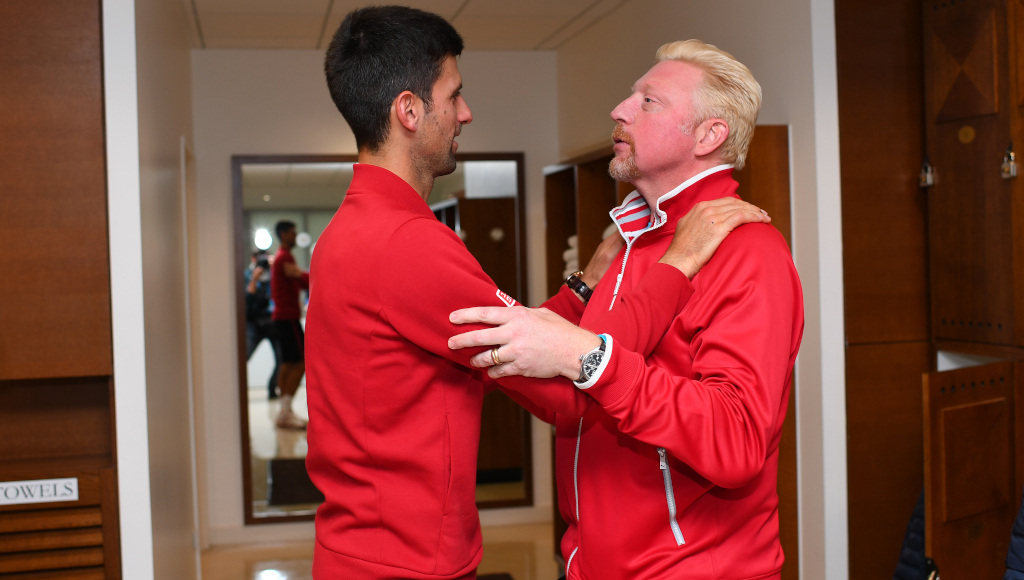 “Then there was a phone call from his manager Edoardo Artaldi, who was also a long- time companion of mine. He asked me if I wanted to become coach of Novak. I visited Djokovic a few weeks later in Monte Carlo and we talked for 48 hours just about tennis. My promise to him was that I had to tell him open and honestly the truth, because everything else doesn’t work and I can’t embellish anything: ‘The reason why you might not be so good anymore is because you felt too good as number one, you didn’t improve. The other players like [Rafael] Nadal and [Roger] Federer have adjusted their game. I don’t like your positioning on the court, I don’t like your serve at all.’

“We had a long conversation. He had already won many Grand Slam titles and was an absolute superstar, but he wasn’t satisfied with himself and he seeked for more. You have to give him credit for that. When I see a lot of young players in contrast, who play a semi-final once and then celebrate that success for half a year. That’s not comparable with a character like Djokovic – but Federer and Nadal are the same. Djokovic is driven by tennis history and eternal records.”

Boris Becker… on his current relationship with Djokovic

“Novak will always be a very close friend of mine. Our cooperation terminated end of 2016 because he wanted to take a break. He had elbow problems and in spring 2017 an operation followed. It has been three very intense, very successful years and at some point even a superstar like Djokovic has to take a little break. And what does the coach do then? There was no stress and we really split up for the better. At the subsequent Grand Slam’s we always met whenever he had a question about a player. My door was always open. A player-coach partnership like that is above all characterized by trust. I can only help a player if he openly addresses his worries and fears. He has to be totally honest and I really appreciate that trust.”