Carlos Alcaraz: Grand Slams are the next step, but Juan Carlos Ferrero to keep ‘bubble’ around teenager 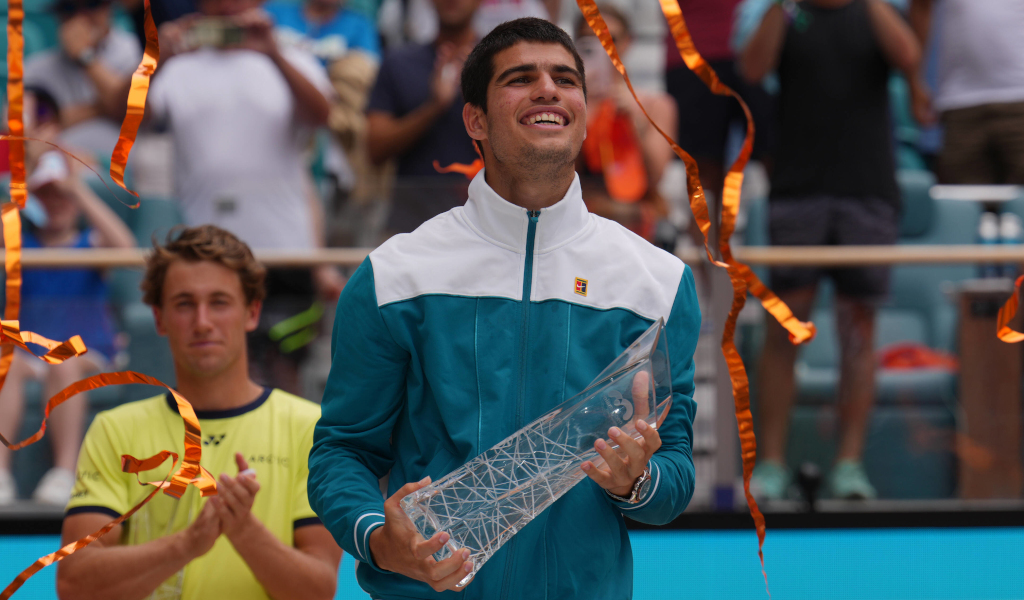 Carlos Alcaraz is being tipped as a future world No 1, but his coach Juan Carlos Ferrero is determined to keep him grounded and make sure he progresses step by step.

Aged 18 years and 333 days, the teenager is ripping up the record books as on Sunday he became the youngest player to win the Miami Open after defeating Casper Ruud in the final. He is also the first Spaniard to win the tournament while he is the third youngest after Michael Chang and Rafael Nadal to win an ATP Masters 1000 event.

Many believe Alcaraz will follow in Nadal and Ferrero’s footsteps by winning majors and becoming world No 1.

Who is ‘new Rafael Nadal’ Carlos Alcaraz and how many Grand Slams will he win?

However, Ferrero is determined to keep the teenager focused and says the next aim is to reach the final few rounds of the Grand Slams with Alcaraz’s best performance to date a run to the quarter-final of last year’s US Open.

“Let him flow. I think the goals and our thoughts about what’s gonna be and what he can reach, now it’s very difficult to say. Let him play,” the 2003 French Open champion said.

“I think he’s able to do, you know, a great year, even let’s cross fingers in Grand Slams it’s maybe next step, you know, to be part maybe at the end of the second week.

“But of course he has to practice and he has to stay focused, because now I think it’s very easy to unfocus and, you know, people around is gonna, a lot of “Hellos,” you know.

“So the team make a bubble and let, you know, him stay calm at home these days, and then, you know, go back, work normally, and then go to Monte-Carlo and try to give his best, as always, as there is no other way.”

Alcaraz has been highly rated for the past few years, but Ferrero admits he is sometimes surprised by his rapid rise.

“His potential, I know since maybe two, three years ago, because I remember when he was practicing with some of the players that they were somewhat higher in the ranking than him, he was 16 or 17, and he could adapt his game to the level of the other players,” he said.

“So, you know, it means that he has something and, you know, is going to keep working on that and keep working every day. So his potential was there, and I was only to let it flow and let it play and keep the things in a good path.

“It surprise me not at all, but of course it’s been very, you know, very fast and very quick. So not easy to do it.”