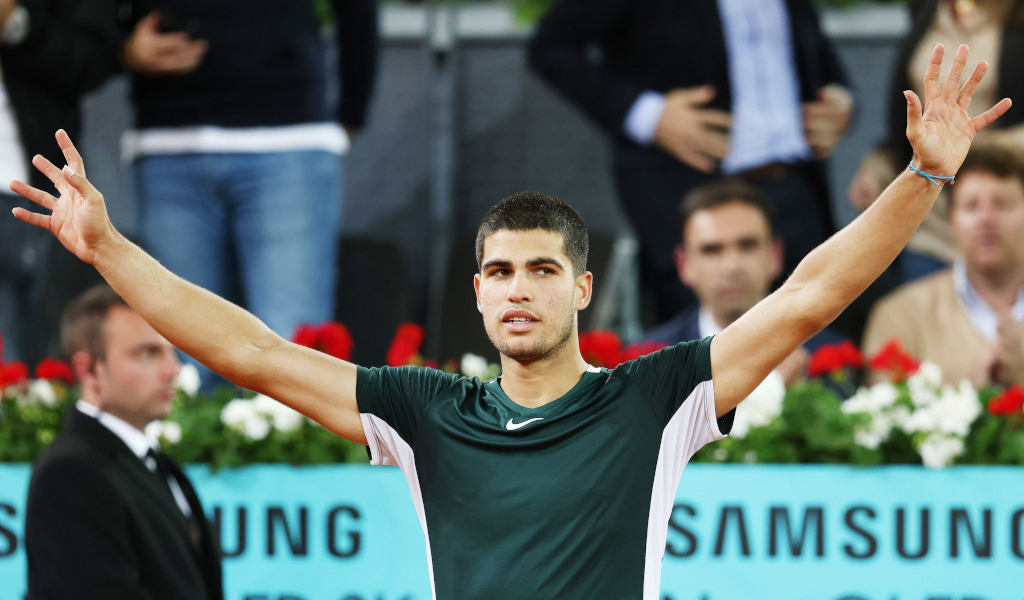 A year ago Carlos Alcaraz found himself outside the Top 100 and had zero ATP Tour singles titles to his name heading into his maiden Madrid Open campaign. Fast forward to 2022 and has four trophies to his name and feeling at home when playing in big matches.

The teenager is on a high after winning the Barcelona Open last week with the title coming not long after he won his maiden ATP Masters 1000 trophy, the Miami Open, while he also notched up the Rio Open in February.

He produced another accomplished display in his Madrid opener, coming from behind to see off Nikoloz Basilashvili 6-3, 7-5 in the early hours of Wednesday morning.

A perfect example of Alcaraz’s ability to consistently win points from way back in the court! pic.twitter.com/3KYrAd6oVL

He had to dig deep as he found himself 1-3 down, but hit back immediately to get back on serve and then won four of the final five games – including another two breaks – to take the first set.

The Spaniard also made a poor start to the second set as he was broken in the opening game, but drew level in game four before again losing his serve as the world No 27 edged 2-3 ahead.

Alcaraz finally found his rhythm again and broke back in game 10 and, after a love game, claimed another break to wrap up the match.

“I think I played really well. This is a tough opponent. He plays really hard,” Alcaraz said post-match. “I think that the first match in every tournament is tough, but I was focussed from the beginning to the end and I’m really happy to get into the next round.

“I think I’m more mature now. One year is not too much time to get mature but I think I’m a different player, different person now. I manage the nerves better than before and I think now I’m ready to play these kinds of matches in these kind of stadiums in front of a lot of people. I’m feeling comfortable in these types [of matches].”