The 2022 Croatia Open Umag is loaded with young guns as defending champion Carlos Alcaraz, Jannik Sinner, Holger Rune, Sebastian Baez and Lorenzo Musetti are all in the main draw for the ATP 250 event.

Alcaraz, who will take on Musetti in the final of the ATP 500 Hamburg Open on Sunday, is the top seed and he will face either Jiri Vesely from the Czech Republic or Argentine Federico Delbonis in the second round with sixth seed Daniel Altmaier from Germany a projected quarter-final opponent.

Norwegian 19-year-old Rune, who has lost six matches in a row since reaching the quarter-final of the French Open, is the other heavyweight in the top half alongside seventh-seeded Italian veteran Fabio Fognini. 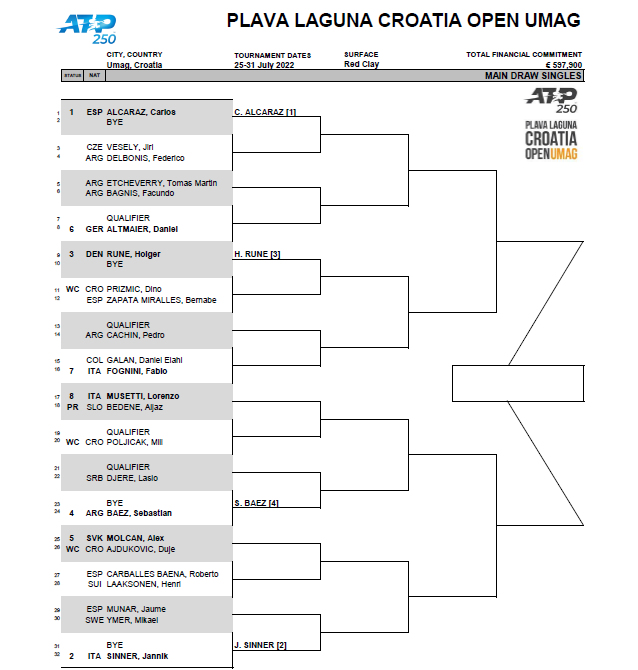 Second seed Sinner, the man who beat Alcaraz in the fourth round at Wimbledon before losing to eventual champion Novak Djokovic in the last eight, will start his campaign against either Juame Munar from Spain or Swede Mikel Ymer in the second round.

Baez, who finished runner-up at the Swedish Open last week, faces Laslo Dere from Croatia or a qualifier in the second round and he is projected to take on eighth seed Musetti in the quarter-final.