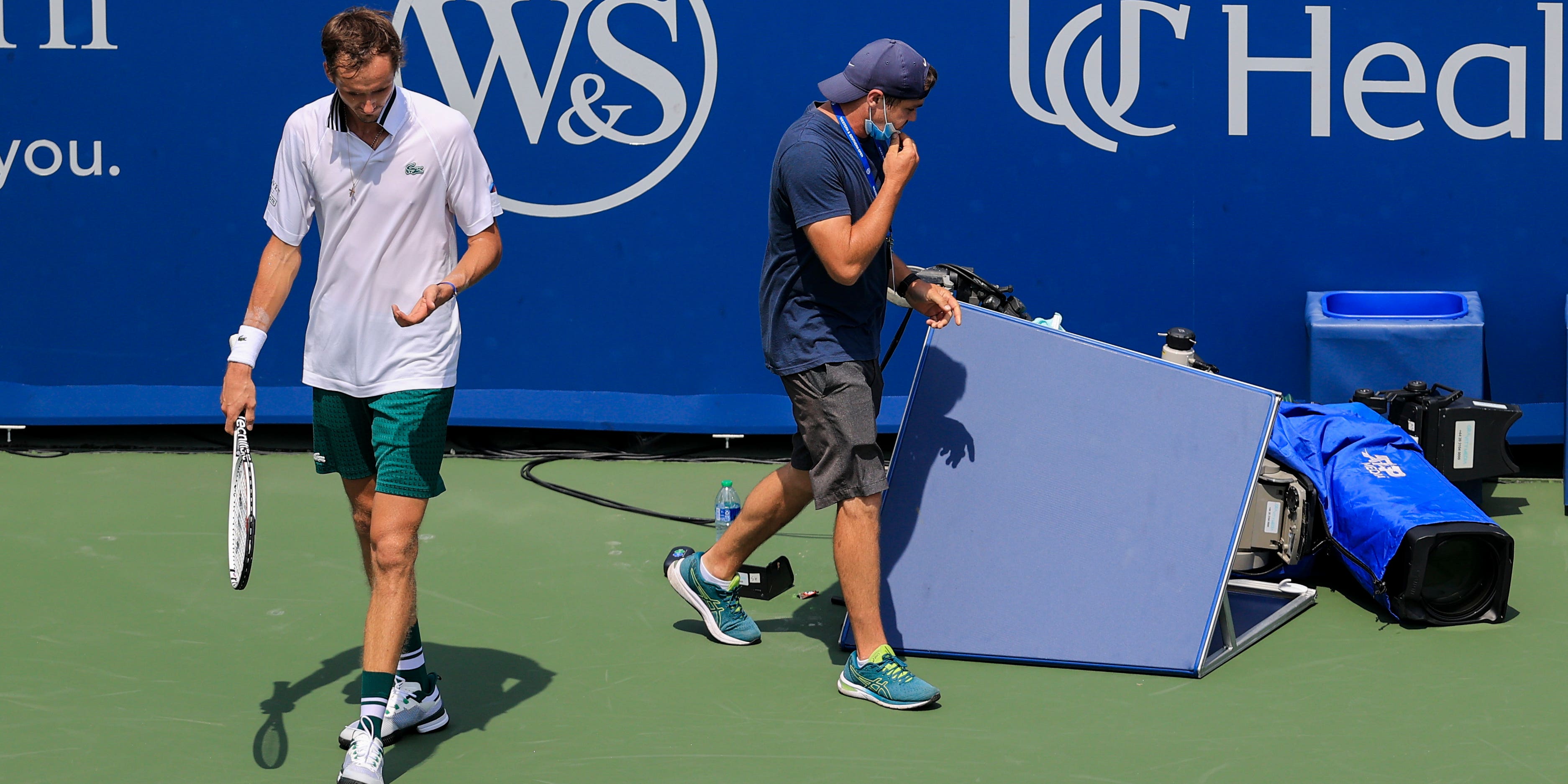 Daniil Medvedev had a run-in with a courtside TV camera as he missed out on a place in the final of the Western & Southern Open.

The top seed was a set ahead against fellow Russian Andrey Rublev when he collided with the camera during a rally.

Clearly annoyed at its positioning on the court, Medvedev shoved the lens with his foot before complaining to the umpire that he “could have broken my hand”.

Not your every day occurrence, as Daniil Medvedev collides with a camera in Cincinnati#CincyTennis pic.twitter.com/BSK51FyyiI

The right-hander, ranked second in the world, needed a medical time-out for treatment on his left hand.

Whether it inhibited him was unclear, but fourth seed Rublev took advantage to gain a first career win over his compatriot, prevailing 2-6 6-3 6-3.

It was a big win for Rublev, who had never won a set against Medvedev in their previous four meetings.

”Even when I was 2-6 down, the score should not have been like this because the points were so tight,” Rublev said in his on-court interview. “The match was so intense, so many long rallies, super tough, super physical, super mental. A lot like a chess match.

“Medvedev is one of those players who won’t give you a chance to attack, but if I have enough power and chose the right moment, I have to be the one to make him run. In the end, I was trying to find the perfect moment to start being more aggressive to open the angles.

“It gives me more confidence that I can compete against him. There are still so many things to improve, but It’s like you pass university and they give you a diploma.”

Rublev will play Tokyo Olympics gold medallist Alexander Zverev in the final after the German pulled off a superb comeback in another semi-final that ran against the rankings.

The third seed overcame second seed Stefanos Tsitsipas 6-4 3-6 7-6 (4), having been down a double break at 1-4 in the final set while also troubled by a stomach upset.

In a torrid encounter lasting two hours and 41 minutes, Zverev gained the edge in converting four of five break points against Tsitsipas’s serve, while the Greek converted only four of eight.

Rublev will be hoping history repeats from his semi-final as he takes on Zverev. As he did before the semi-final, Rublev will go into the decider with an 0-4 career record against his opponent.

“I didn’t feel well,” Zverev said of the last set, on atptour.com.

“In the middle of the second set I felt low energy and my stomach wasn’t great. I broke him at 4-2 in the third and went outside the court and did my thing. I started to feel better, the doctor came out and gave me a little medicine and my stomach started to calm down a little. The energy came back but I think that was also adrenaline.”

Speaking of his comeback in the earlier semi, Rublev said: “Even when I was 2-6 down, the score should not have been like this because the points were so tight. The match was so intense, so many long rallies, super tough, super physical, super mental. A lot like a chess match.”