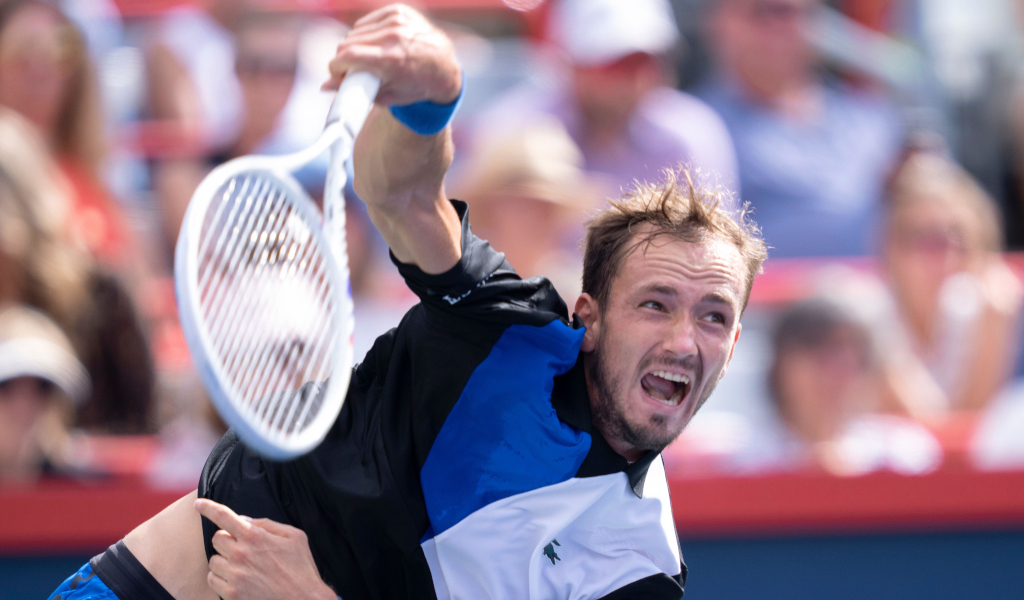 Daniil Medvedev needed to be patient but came out on top against Dominic Thiem on Thursday at the Vienna Open.

The top seed’s persistence in the Round of 16 match paid off as he registered a 6-3, 6-3 second-round win in Vienna.

The former US Open champions came out firing in a hard-fought opening set at the indoor ATP 500 event.

Thiem enjoyed the backing of the vocal home crowd and gave them plenty to cheet in the early going with some clean hitting from the baseline.

However, Medvedev countered with defiant defence and turned the tide midway through the first stanza.

After the Russian clinched the first break of the match for 4-3, the top seed’s combination of consistent, powerful hitting came to the fore as he accelerated away to a 98-minute victory.

“It was a tough match,” said Medvedev after his win. “[Around] one hour, 40 [minutes], and you know when it’s one hour, 40 minutes, even if you win 6-3, 6-3, that it was a tough match. It could have gone either way. At one moment in the match I started to put a lot of pressure on his serve. I was serving good myself, so didn’t [give] him to many opportunities on my serve, and that was the key today I think.”

“That was the first game in the match where I actually won the first point on his serve,” said Medvedev. “Otherwise, it was 40/0 for him all the time, so a little bit tougher to break. This game I managed to put pressure on him. He had two or three game points where I managed to bring it back to deuce which is really important. When I won this game, I got a little bit of momentum during the match.“

With the win, Medvedev equalled his quarter-final run on his only previous Vienna appearance in 2020. The 26-year-old will play sixth seed Jannik Sinner or Francisco Cerundolo next as he chases his second ATP Tour title of the season.

Medvedev is currently fifth in the ATP Race To Turin, and a deep run in Vienna would bring him closer to claiming one of the three remaining qualification spots for the Tour Finals.

Another Turin hopeful, Hubert Hurkacz, advanced to the last eight as he held his nerve to clinch a three-setter against Emil Ruusuvuori.

The fifth seed responded well to dropping the second set against the Finn, racing to an unassailable 4-1 lead before sealing a 7-5, 4-6, 6-3 victory in which he struck 41 winners.

Hurkacz is an outsider for the race as he sits in ninth on the Race To Turin standings chasing qualification for the Finals for the second time.

The 25-year-old Pole might rise as high as seventh with a title run in Vienna, where his quarter-final opponent will be second seed Stefanos Tsitsipas or Borna Coric.

Meanwhile Grigor Dimitrov struck a blow to Andrey Rublev’s bid for his third consecutive Finals appearance as he spoiled the Russian’s run in Vienna.

The Bulgarian prevailed 6-3, 6-4 in 71 minutes to level his career record against Rublev at 3-3. Rublev is sixth in the ATP Live Race To Turin, but he could be overtaken by Felix Auger-Aliassime this week.

In the last eight Dimitrov will take on Marcos Giron, who sprung an upset in impressive style with a 6-3, 6-4 win against British No 1 Cameron Norrie.