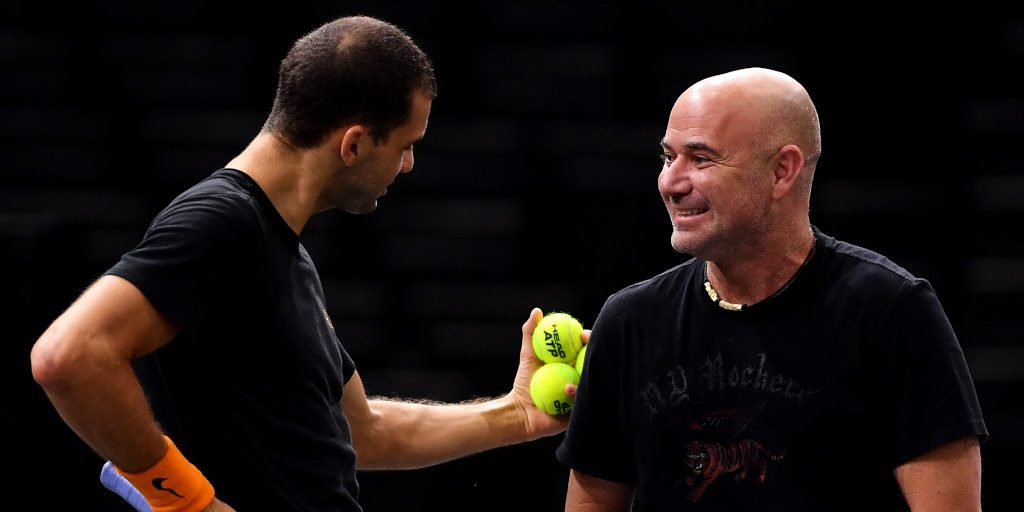 Andre Agassi has been brought into Grigor Dimitrov’s coaching team to help the Bulgarian tackle the psychological challenges of the Tour, Daniel Vallverdu has revealed.

Dimitrov endured a wretched 2019, dropping to number 19 in the world rankings after winning the ATP Finals 12 months ago.

He began working with Agassi at the Paris Masters, and head coach Vallverdu has explained why.

“I spoke to Grigor for a while about adding something to our team, to help him have a more consistent game to be regularly at the top”, he said.

“The problem with him, with his kind of game and personality, is being a solid player all the time.

“Obviously, we had already worked a lot on it, but my job as a team leader is to find solutions to improve him.

“Not only to be better in some tournaments, but much more often with his game and potential.

“I told him: “I feel that to be at the top, you need someone. I have known Andre for a while since I worked with Andy [Murray], and you as well since when you are a junior. Look, let’s ask and see what he thinks”.

“Everything went well and everyone in the team are very excited.”

Agassi has been absent from the game since his split with Novak Djokovic at the start of the year, though his return is certainly a welcome one.

But what exactly is he offering Dimitrov?

“A lot of experience in terms of mentality and mental status,” Vallverdu explains.

“He knows what it takes for a player to get to the top, what matters is on court and off-court.

“Andre had a career where he understood what’s good and what was bad everywhere.

“We have a better perspective on what’s good when we know what’s wrong.”