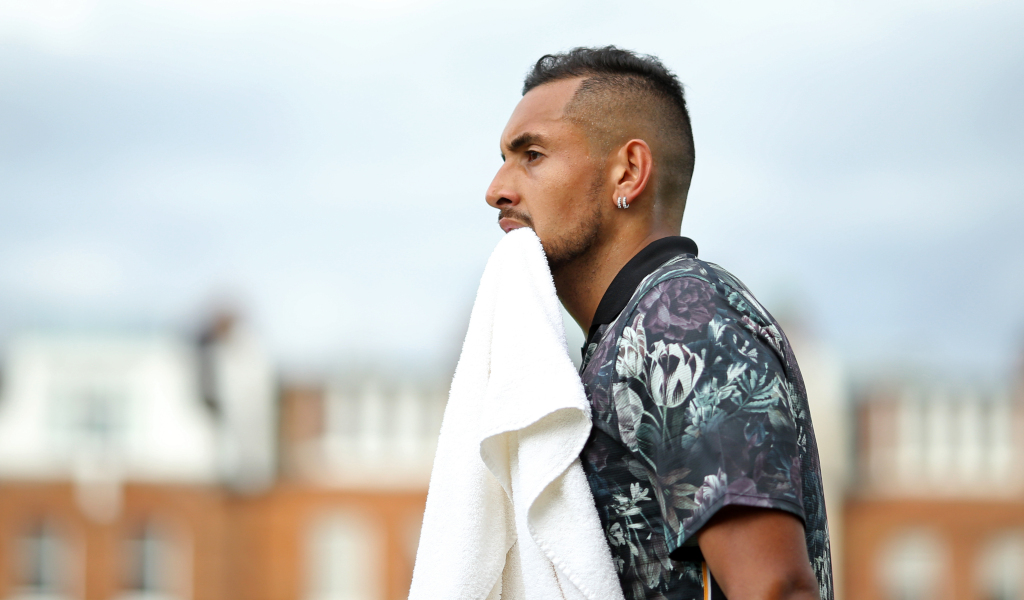 Nick Kyrgios hit out at “idiot umpires and idiots in the crowd”, as his on-court tantrum continued when he met the media at the Fever-Tree Championships at the Queen’s Club in London.

The Australian crashed out of the tournament as he lost against Felix Auger-Aliassime in a tight 7-6 (7-4), 6-7 (3-7), 7-5 defeat, yet it was his boisterous antics on the court and then in his post-match interview that will create headlines for the next few days.

After some colourful language directed at match officials in his first-round win against Roberto Carballes Baena and then in his loss to Aliassime, the Aussie faced the media and didn’t hold back as he responded to questions that clearly irritated him.

“I thought the calls were pretty ordinary all day, to be honest,” Kyrgios moaned. “That’s what you get when you play on an outside-court without Hawk-Eye.

“I just don’t think, at this level of sport, that we should have line judges and umpires that aren’t making the right decisions. And I know what happens. Nothing happens. They get a little slap on the wrist. I had a conversation with them in Miami after I got fined again for their mistake.

“You know, they don’t get any warning or fine or anything for their mistakes. So what’s the difference? For me doing a code violation, why can’t they get fined for having a terrible day in the chair?

“Like, there’s hundreds of thousands of dollars on the line. It’s not a joke. They just think it’s a joke because nothing happens to them after the match. They don’t get any investigation or anything.

“I think it’s ridiculous. Like, why not have another umpire ready to come in if that guy’s having a terrible day? I don’t understand. I have to pay the fines for it. The calls are horrendous, but I get fined and he gets nothing. It’s like a black star. I don’t know what happens. It’s rubbish.”

Kyrgios was involved in a verbal altercation with fans after his defeat and he gave this response when quizzed about the incident.

“I’m on court. They’re all watching me. Unbelievable,” he added. “They saw me fall. Do you think they saw me fall? I was on the ground for how long? Two minutes?

“You have people booing at you and saying, calling you names. What would you do? ‘Would you be all right with that?

“I’m playing my heart out, and I’ve got to deal with idiot umpires and idiots in the crowd. What do you want from me, dude? I don’t care. Some of the stuff they say to me, is that okay? Like, they paid a ticket to see me play for, like, three and a half hours.

“Of course I’m going to go back at them. I’m not the type of guy that’s going to walk away from that. ‘If you are, that’s too good. Like, unbelievable discipline. I’m not saying it’s right, but that’s just how I am.”

Kyrgios may face a punishment for his comments on a day when he also questioned the integrity of referee Fergus Murphy, while also urging him to remove his hat because it looked ‘ridiculous’.