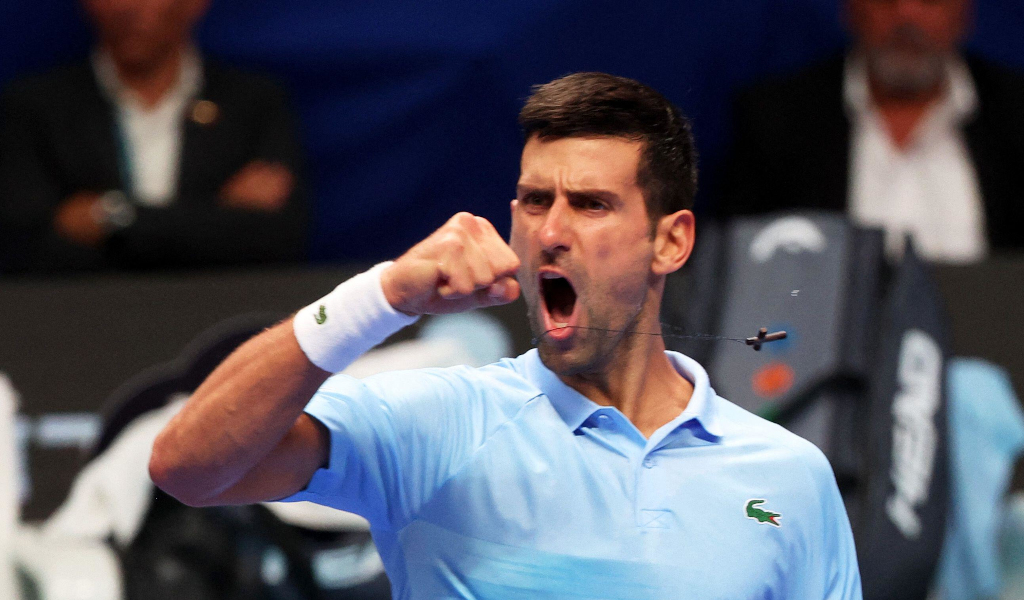 Novak Djokovic is on a roll as he eased past Botic van de Zandschulp to secure his 13th consecutive win and reach the quarter-final of the Astana Open.

Fresh from winning the Tel Aviv Open – his first top level singles tournament since successfully defending his Wimbledon title – Djokovic rolled over Cristian Garin on Tuesday as he dropped only two games.

He was once again in a dominant mood in the second round on Thursday as he brushed aside world No 34 van de Zandschulp 6-3, 6-1 in one hour and 11 minutes at the Kazakhstan event.

Djokovic broke in game six of the opening set and then three times in the second set to blow the Dutchman away.

“I think my serve worked very well when I needed to get out of trouble in the first set, particularly,” the former world No 1 said.

“There were some 30-30 games and when I broke his serve at 4-2 he had a break point. I came in and he had a look at a passing shot but missed it. The match is decided in these moments.

“The difference between 5-2 and 4-3 up is big and I served well to win the first set. The second set I started to read his serve better and just started swinging through the court more.

“Botic is a quality tennis player and when he has time he can hurt you so I tried to take away that time from him and make him uncomfortable.”

In the groove 🙌@DjokerNole takes out van de Zandschulp 6-3 6-1 and moves into the Astana Open quarter-finals!#AstanaOpen pic.twitter.com/rQPs4dqKwj

No rustiness this time for Djokovic despite three-month break

This is a different Djokovic to the one who looked sluggish after returning from his first enforced hiatus earlier this year. After missing the Australian Open due to his unvaccainted status, he played in the Dubai Tennis Championships in February and looked out of touch while he lost his opening match at the Monte-Carlo Masters in April.

Although he reached the final of the Serbia Open later in April, he dropped a set in each of his three wins before losing the final in three sets against Andrey Rublev.

Of course, things eventually clicked at the Italian Open as he won while he reached the quarter-final of the French Open before going on to defend his Wimbledon crown in July.

He then missed the North American hard-court season due to Covid-19 entry regulations, but unlike his first “comeback”, he returned in peak condition.

Playing in the Laver Cup may have helped with his match fitness as he returned with a bang at the Tel Aviv Open last week, winning four matches without dropping a set to lift the title.

And now he is continuing that form in Astana.

“My season is different from any [other] so don’t look at my season in comparison to others,” the 21-time Grand Slam winner said after his latest win.

“I haven’t played for over three months before Israel so I definitely am fresh physically and mentally motivated to do well.”

The fourth seed will meet Karen Khachanov in the last eight after the Russian defeated ninth seed Marin Cilic 2-6, 6-3, 6-3.

Victory in that match could see a Djokovic-Daniil Medvedev semi-final after the 2021 US Open champion beat Emil Ruusuvuori of Finland 6-3, 6-2.