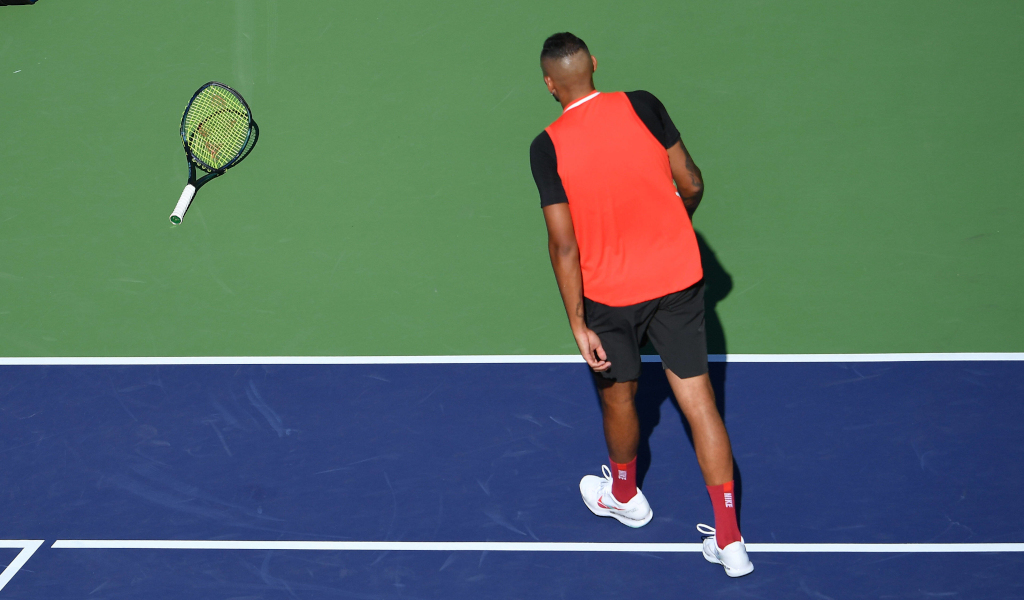 He has been winning praise for his improved maturity at the Miami Open, but the Nick Kyrgios of old returned as he picked up a game penalty as he crashed out of the fourth round at the Miami Open to Jannik Sinner on Tuesday.

The combustible Australian vented his frustration towards umpire Carlos Bernardes during a tight first set, then lost the tie-break after being docked a point for smashing his racket and subsequently double-faulting.

Kyrgios was docked a game for smashing his racket again early in the second set – then posed for a selfie with a young fan who ran onto the court – before slipping to a 7-6 (3) 6-3 defeat.

“Get a new set of referees, these guys don’t know how to do s***,” screamed an angry Kyrgios during his latest on-court rant.

“Walky-talkies going off. It’s a joke. He is a joke. Get rid of every single staff and start over. Everything. I will run the sport. I could do 100x a better job. Marketing. Everything. You guys have no idea. None. You guys can’t even ref right.

“Unbelievable. It’s the fourth round at Miami – one of the biggest tournaments – and you guys can’t do your jobs. It’s embarrassing!”

Sinner admitted he needed to ignore the chaos going on in the other half of the court, as he booked his place in the quarter-finals.

Reflecting on how he avoided being distracted by the circus at the other end of the net, Sinner told Amazon Prime: “I just tried to stay in the present moment. I know that he can raise his level immediately, especially when he breaks. At 4-3 (in the second set) if I serve worse there, he can get back into the match. I tried to stay calm somehow and think I’ve done a great job today.

“Today, I raised my level a bit. I tried to play a bit more aggressively. The conditions are a bit easier, it’s not as windy. I tried to stay close to the lines. I also served well in important moments. It can give me a lot of confidence for the next round.”

There was better news for in the Doubles, as he moved into the semi-finals with partner Thanasi Kokkinakis after a win against Marcel Granollers and Horacio Zeballos.