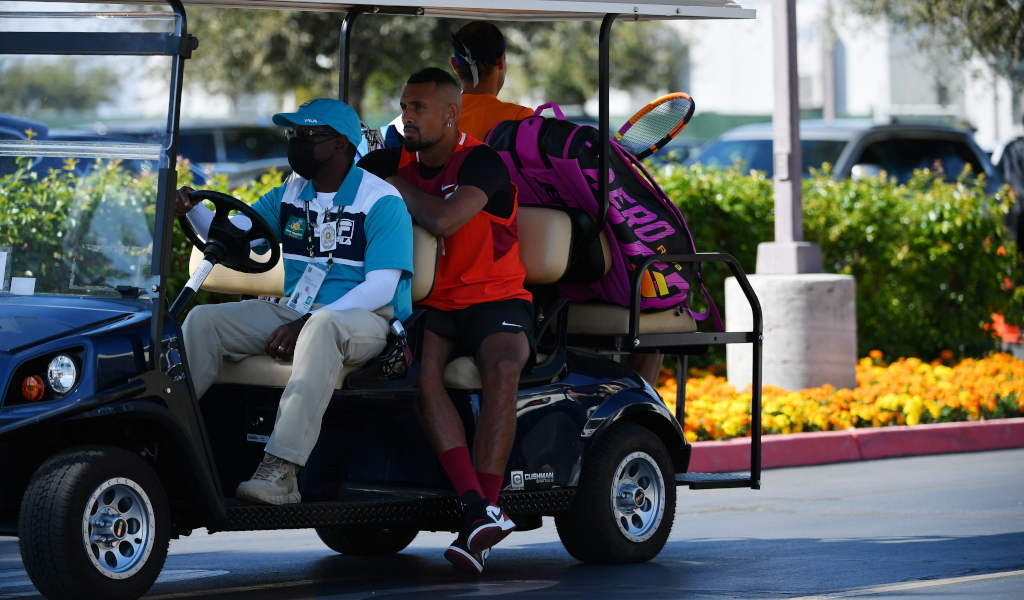 Nick Kyrgios has apologised after he nearly hit a ball boy with a racket hurled in anger following his loss to Rafael Nadal in Indian Wells.

Kyrgios sent a text message to the ball boy later and has promised to gift him a racket.

The volatile Australian received a warning for smashing a racket during the first set and then lost the set after being given a point penalty for swearing at a spectator.

Kyrgios regained his composure to take the second set but, after losing a close decider to go down 7-6 (0) 5-7 6-4, the 26-year-old flung his racket angrily and a ball boy standing at the back of the court had to move out of the way to avoid being hit as it bounced up and flew into the advertising hoarding.

Kyrgios took exception to being asked about the incident in his press conference, saying: “Did I throw the racket anywhere near him originally?

“It landed a metre from my foot and skidded and nearly hit him. I’m human. Things happen like that. Obviously it was a very misfortunate bounce. I think if I did that a million times over it wouldn’t have gone that way.”

Kyrgios later took to Instagram to apologise and tweeted an exchange of messages with the ball boy in which he promised to give him a racket.

It is less than a month since Alexander Zverev was disqualified from the Mexican Open in Acapulco for losing his temper and bashing his racket against the umpire’s chair just below the official’s foot.

Nadal spoke out strongly in favour of heavier sanctions – Zverev was given a suspended ban – and he said after this latest incident: “When you allow the players to do stuff, then you don’t know where is the line, and it’s a tricky thing.

“But, because these situations are happening more and more often, probably ATP should review things and make decisions. Not about today’s match because I didn’t see what happened in the end.

“I think Nick had a great attitude during the whole match in terms of fighting spirit and of course he has his personality, his character. Sometimes he does things that I personally don’t like, but I respect because of different character, different points of view, and a different kind of education.”

The victory extended Nadal’s winning run in 2022 to 19 matches and in the semi-finals he will take on 18-year-old Carlos Alcaraz in a Spanish battle of the generations.

He was so nervous! But hopefully makes use of the racket!!! Take it easy young king ❤️👑 pic.twitter.com/nIIBaFinCR

Alcaraz has been playing superbly in the Californian desert and he ended the title defence of Britain’s Cameron Norrie with a 6-4 6-3 victory.

Nadal praised his young compatriot, saying: “I think he’s unstoppable in terms of his career. He has all the ingredients. He reminds me a lot of when I was a 17 or 18-year-old kid.

“And I am super happy – of course he’s going to be a great rival for now and for the next couple of months, without a doubt.

“But, thinking and being selfish, it’s great to have such a star from my country, because, for the tennis lovers, we’re going to keep enjoying an amazing player fighting for the most important titles for the next I don’t know how many years.”

Despite the defeat it has been a very good fortnight for Norrie, who stands on the verge of the top 10 and has emphatically put his difficult start to the season behind him.

The British number one felt the strain of a busy schedule over the last few weeks, but he said of his first experience of defending a title: “I think it’s always nice to back that up and know that it wasn’t just a one-off event.

“I won obviously Delray and then (made the final in) Acapulco and got a lot of matches under my belt and I felt like I was playing at the level that I was last year, so it’s nice to feel like myself again.”

Women’s defending champion Paula Badosa kept alive her hopes of a repeat by beating Veronika Kudermetova and will next face sixth seed Maria Sakkari, who saw off Elena Rybakina.