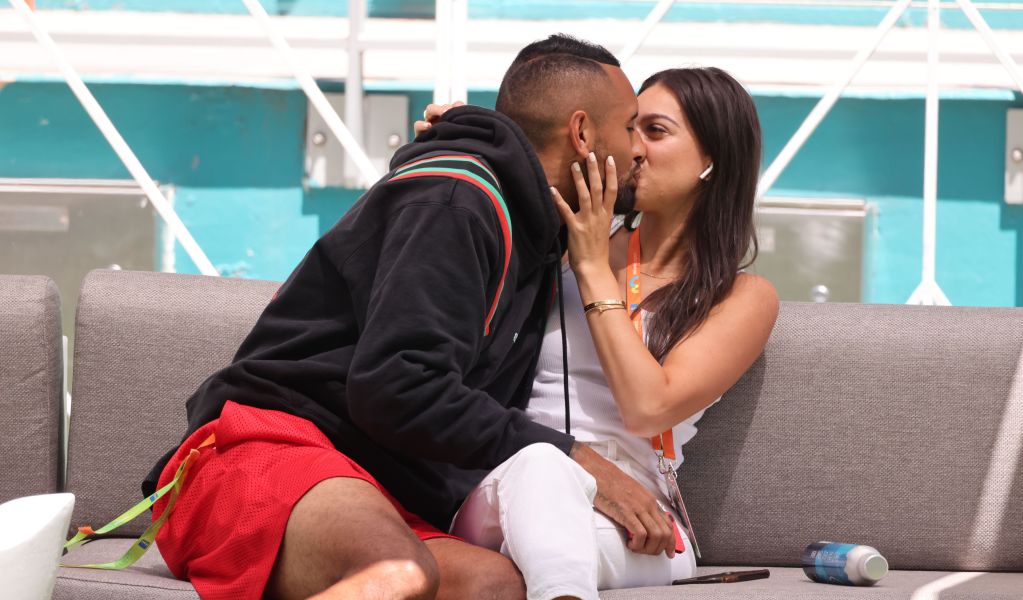 He was the tennis bad boy who seemed reluctant to be tamed, but Aussie Nick Kyrgios has turned his life around on and off the court after starting a relationship with Costeen Hatzi.

Kyrgios will play at the ATP Finals for the first time in his career, as he prepares to team-up with Thanasi Kokkinakis in the doubles event in Turin later this month.

The double duo and best friends started 2022 by winning the Australian Open in stunning fashion, with that win coming soon after Kyrgios started his romance with Hatzi.

He has gone on to enjoy his best year on tour yet, reaching the final at Wimbledon and showing a level of consistency that has eluded him throughout his previously chaotic career.

That Wimbledon run would have pushed him to the brink of qualifying for the ATP Finals in the singles event as well if ranking points were not stripped away from that event due to the All England Club’s decision to ban Russian and Belarusian players as a response to Ukraine’s invasion of Ukraine.

The Kyrgios story has been one of the most unexpected of 2022 and has provided a wonderful narrative for the upcoming Netflix series that will go behind the scenes on the ATP Tour, with unprecedented access to the game’s top stars.

The always entertaining Kyrgios is one of the players the Netflix team have focused on, for obvious reasons, and as he looks back on his year, the Aussie suggests his relationship with Hatzi has been crucial to bringing some joy into his life.

“Honestly, I feel as if I’m a lot older, a lot more mature,” he told reporters earlier this year.

“I feel like when you get older, you realise you shouldn’t be taking these things for granted, the way you’re feeling, the way your body feels.

“Also, I have a partner with me now I see a future with and I kind of see that I have to provide for. So I feel like my motivation is a lot higher than it used to be.”

Costeen was well-known before meeting Kyrgios, as she is a Sydney-based blogger and founded her own business, Casa Amor Interiors, which focuses on minimalist home decor.

Hatzi’s social media presence has grown with the publicity generated by her relationship with Kyrgios and she now boasts over 150k followers on Instagram.

She has also been attracting plenty of interest from sponsors, with the fashion-loving influencer finding time to promote brands while also travelling the world with Kyrgios.

She has not made too many comments in public, but did post a gushing message back in July as her fella prepared to take on Novak Djokovic in the Wimbledon Final.

“Words cannot explain how proud I am of you,” she wrote.

“You are supported by so many and you never fail to show how talented, entertaining and resilient you are. Finals at Wimbledon, that is a huge achievement in itself.

“Your hard work and dedication is paying off. I am so lucky to be on this journey with you.”

This appears to be the perfect match up for Kyrgios and while he had a reputation as something of ladies’ man in throughout his tennis career, it seems Hatzi could be the one to end his search for the perfect partner.

“She is definitely the one, I am in love with her and she is an amazing person and an amazing support for me,” he added.

“She is my best friend literally. We go through ups and downs together but I love her to bits.

“I guess for me as an athlete, just to know that I have got that person there that can overcome and have that shoulder to lean on whenever I need, that is what I love about her.”

Kyrgios’ love-life has created headlines for the wrong reasons at times in 2022, but the story with Costeen appears to be nothing but positive.

Tennis fans around the world should be grateful that this wonderfully gifted player has found the stability in his life off the court to entertain us all on it.