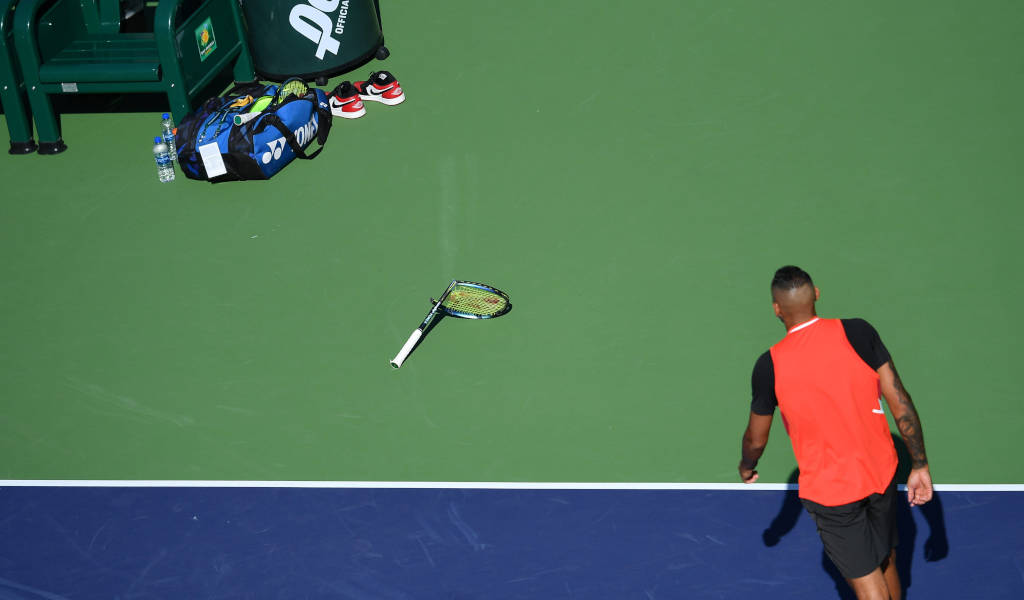 Nick Kyrgios took issue with the line of questioning from the press after his defeat to Rafael Nadal at Indian Wells.

Kyrgios was quick to rubbish comparisons between his racket throwing after the match and the Alexander Zverev outburst in Acapulco.

The Australian doesn’t believe that the two incidents are even vaguely comparable as he threw his racket downwards and wasn’t close to the ballboy whom the racket nearly struck.

“Did I throw my racquet anywhere near him (the ballboy) originally,” Kyrgios said. “It landed a meter from my foot and skidded and nearly hit him.

“I’m human. Things happen like that. It was an accident. It most definitely wasn’t like Zverev. It was a complete accident. I didn’t hit him, thankfully. It wasn’t my intention.

Nadal didn’t see Kyrgios throw his racket but commended the spirit in which the Australian contested their match.

“I think Nick had a great attitude during the whole match in terms of fighting spirit, and of course he has his personality, his character,” Nadal said.

Kyrgios hadn’t dropped a set before the quarters and saw off eighth-seeded Casper Ruud in the third round before getting a walkover into the final eight.

He was left frustrated that once again the narrative would shift away from how well he has played to how he has behaved.

“I beat one of the guys that had like nearly 60 wins last year and no one remembered that. And everyone will just remember that time where Kyrgios lost to Rafa at Indian Wells or the time that he threw the racquet.

“People like you spoil sport,” he sniped at a reporter who asked about his post-match tantrum.

Kyrgios got into it with the rowdy crowd which included a confrontation with actor Ben Stiller.

In a week where crowd behaviour is under the spotlight after Noami Osaka’s heckling incident, Kyrgios said he believes that spectators should be better behaved.

“I think it’s just this generation,” the 26-year-old said. “Everyone feels like their opinion is valid. Like, when you’re a spectator and you’re watching professionals play tennis, you should just be quiet.”