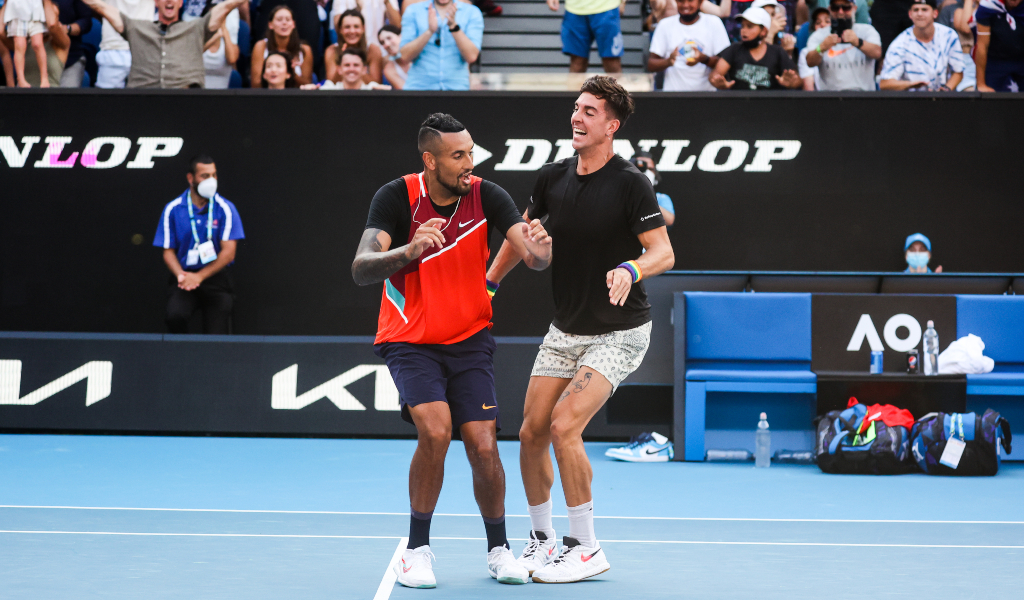 So far the 2022 season is shaping up to be a great one for Nick Kyrgios after he was part of the winning team at the Australian Open earlier this year – but his success isn’t his alone as became the doubles champion with fellow Aussie Thanasi Kokkinakis and they’re now both through to the semi-finals of the Miami Open.

Earlier this month, the controversial athlete opened up about his previous struggles with mental health while admitting now he is the “best I’ve probably ever felt” mentally while Kokkinakis has only recently returned to the dizzy heights of the sport after suffering with a number of long term injury problems.

However, the successes they’ve achieved together have rubbed off on them individually.

“I don’t give enough credit to doubles,” Kyrgios said during his third round post match interview.

“That’s helped me a lot, and Thanasi as well, we’re both returning a lot better on the singles court.

“The way I’m serving, the way I’m returning and working the points and competing, it’s quite a sight to see.”

The world No 102 is through to the quarter finals of the Miami-based competition after he defeated Fabio Fogini and he will next face Jannik Sinner, who he was meant to play during the Indian Wells Masters but the Italian pulled out.

And before that in California he managed to make it to the quarter finals as well before losing to world No 3 and winner of the Australian Open Rafael Nadal.

Meanwhile, Kokkinakis is also through to the quarter finals at the Miami Open and he’ll be facing Alexander Zverev tomorrow to try and earn a place in the next stage of the tournament.

Another person who thinks this ‘Special K’ pairing is helping the two players in their singles competitions is former Australian player and 16 time doubles Grand Slam champion Todd Woodbridge.

“Someone said, ‘How do you make him (Kyrgios) better?’ Well, singles isn’t going to do it because you go out on a singles court by yourself and it’s you and that fella running around in your head, and that’s where he has trouble,” the 50-year-old told Channel Nine.

“The doubles court is brilliant for him, we saw that with Kokkinakis because he can’t let his partner down, they can verbalise to each other.

“That’s been an interesting part of these last couple of months for Nick, he’s got confident again but it’s actually Thanasi and the dubs that have helped him get to that space and we’ll see how long he can keep his singles going.”