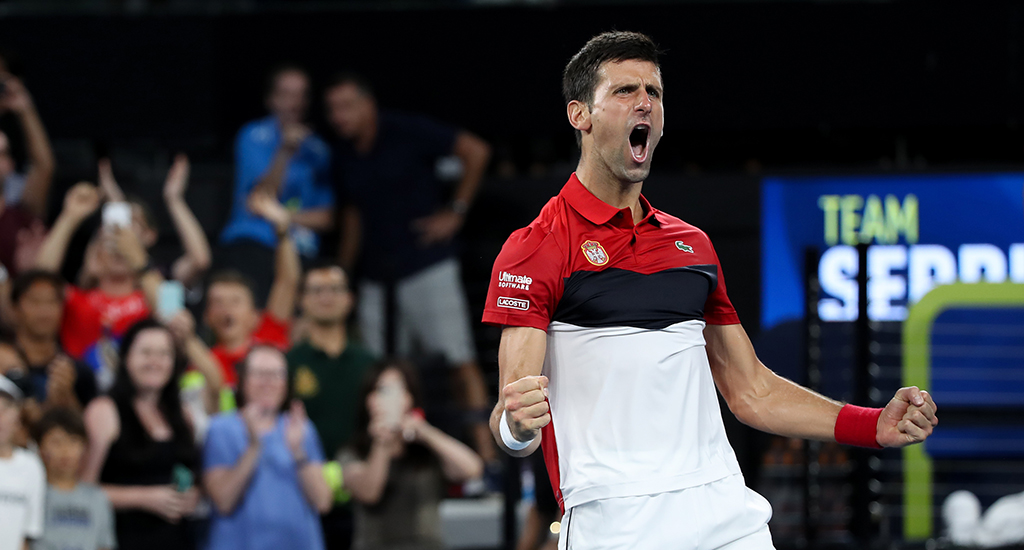 Novak Djokovic guided Serbia to victory in their ATP Cup opener after seeing off South Africa’s Kevin Anderson in a repeat of the 2018 Wimbledon final, while Rafael Nadal was also on song.

And Serbia made it 3-0 thanks to Nikola Cacic and Viktor Troicki’s 6-3 6-2 victory in the doubles.

World number one Nadal, meanwhile, won his singles match in straight sets as Spain eased past Georgia in Group B.

After Roberto Bautista Agut had hammered Aleksandre Metreveli 6-0 6-0 in the first match, Nadal beat Nikoloz Basilashvili 6-3 7-5 to wrap up the tie before Pablo Carreno Busta and Feliciano Lopez won the doubles clash to get Spain off to the perfect start.

There was another 3-0 win in the night session as successes for Marin Cilic and Borna Coric over Dennis Novak and Dominic Thiem respectively, and victory in the doubles, saw Croatia beat Austria in Group E.

A Japanese team of Go Soeda, Yoshihito Nishioka, Ben McLachlan and Toshihide Matsui sealed a convincing 3-0 Group B win over Uruguay during the day session.

Meanwhile, Gael Monfils and Benoit Paire powered France to a 2-1 success against Chile in their opening Group A contest.

Paire recovered from going a set down to defeat Nicolas Jarry 6-7 (3) 6-3 6-3, with Monfils winning in straight sets against Cristian Garin. The Chilean duo did go on to record a win in the doubles against Nicolas Mahut and Edouard Roger-Vasselin.

Maximo Gonzalez and Andres Molteni sealed a 2-1 win for Argentina in the deciding doubles match against Poland’s Hubert Hurkacz and Lukasz Kubot.

Guido Pella had put Argentina into a strong position after beating Kamil Majchrzak in three sets, but Hurkacz levelled the tie for Poland with a 4-6 6-2 6-3 triumph against Diego Schwartzman.

Gonzalez and Molteni, however, cruised to a 6-2 6-4 victory to make a strong start to their Group E campaign.