Novak Djokovic: Daniil Medvedev has evolved into one of the best players in the world 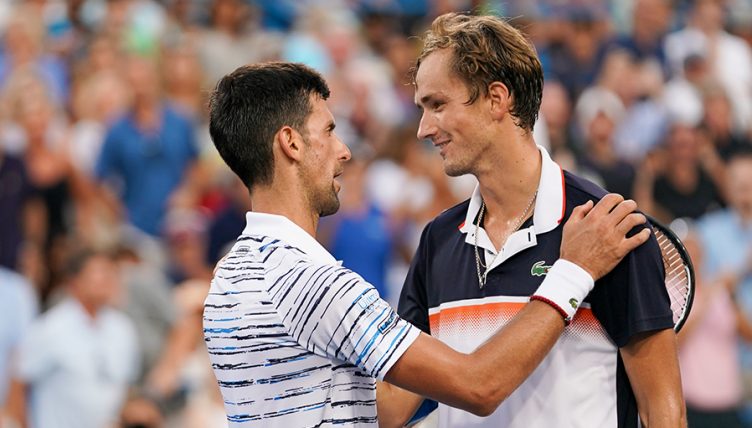 Novak Djokovic heaped praised on Daniil Medvedev after losing to him in Cincinnati, saying the Russian is “one of the best players in the world.”

Djokovic beat Medvedev at the Australian Open at the start of the year, but hos now lost two successive matches against the world number 8.

That puts the Serb in a good place to judge Medvedev, and he certainly seems to like the ‘evolution’ of his game.

“He’s working his way to the Top 5 [in the ATP Ranking],” Djokovic said of Medvedev, who will play his third final in three weeks.

“He’s definitely one of the best players in the world.

“He certainly improved since Australian Open this year. His forehand is better. His movement is better. I mean, his serve was always big.

The dude is in an utterly unreal zone right now.

He’ll face Goffin tomorrow for the #CincyTennis title; Goffin beat him in five at Wimbledon.

“I did not experience this too many times in my career that someone goes so big on second serves and just serves two first serves basically for an extended period of time.

“That’s one of those things where you just take your chances. I don’t think I can kind of say that he improved his second serve.

“But before that, when I could take my chance on the second serve, I was doing pretty well. But there is certainly an evolution in his game and improvement.

“He’s going in the right direction and it’s why he’s doing so well.”