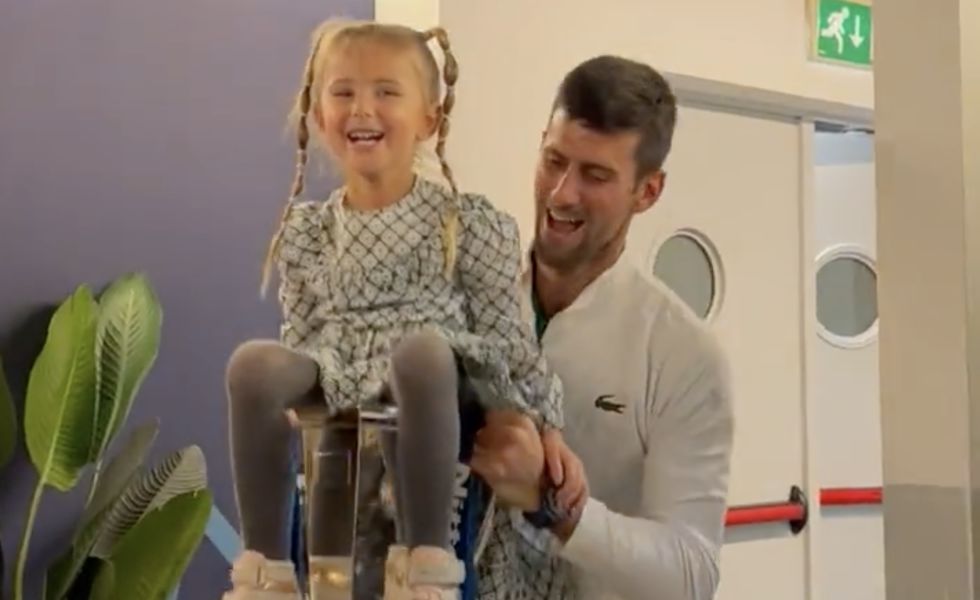 Novak Djokovic had a very different experience as he won this year’s ATP Finals in Turin, with his family courtside for a triumph that confirmed his status as the best player in the world once again.

The ATP rankings may not back up the claim that he is No 1 in the men’s game, but it’s hard to dispute that the 21-time Grand Slam champion is in a league of his own when he is fit and firing on all cylinders after another week of sublime performances.

This tournament was a little different from those that have gone before, as his two children were prominent in his corner throughout the week in Italy.

Son Stefan was practicing on court every day at the event and after his convincing win over Casper Ruud in Sunday’s final, it was daughter Tara’s turn to get in on the act.

With Novak planting his daughter in the heavy ATP Final trophy, he managed to lift the trophy once again and the ATP were on hand to capture the joyous moment.

Djokovic has spoken at length about his family inspiring him at this year’s ATP Finals and he was keen to highlight their influence after his latest victory.

“I’m very grateful to my wife and my children for coming,” Djokovic told the ATP.

“I don’t get to have these moments on the Tour with them so much, so I of course try to enjoy it as much as I possibly can.

“I took both of my children, particularly my son, to a lot of the tennis training sessions, warm-ups and matches.

“He was very loud (in his box). I was very surprised. I could hear his voice the entire time. He was very much into it.

“They make my life on Tour easier. The pressures, the expectations, the tensions that you normally go through in a big tournament like this, when they’re around, it lowers a bit so I can have that time off, quality time with my family.

“That really soothes me and gives me serenity in order to recalibrate and play my best tennis the next day. I cherish these moments a lot.

“Hopefully, as they grow older, they’ll realise even more what special moments we’re living together.”

The former world number one was pleased with his performance and said the long wait for his sixth title made him appreciate the victory more.

“It’s finals, usually these kind of matches are decided by very small margins and one break of serve was enough in both sets,” added Djokovic.

“I knew Casper was playing really well coming into this match. I think we both served very well. I think in some decisive moments, like the 12th game of the first set, I just managed to put a few returns back in play, (to) make him run and make him play.

“A lot of nerves, particularly in that 30-all point, that was the longest rally of the match.

“As I said, you’ve got to stay focused the entire match, every single point. Momentum can shift to the other side very quickly.

“Seven years, it’s been a long time, but at the same time this – the fact that I waited seven years – makes this victory even sweeter and even bigger.”