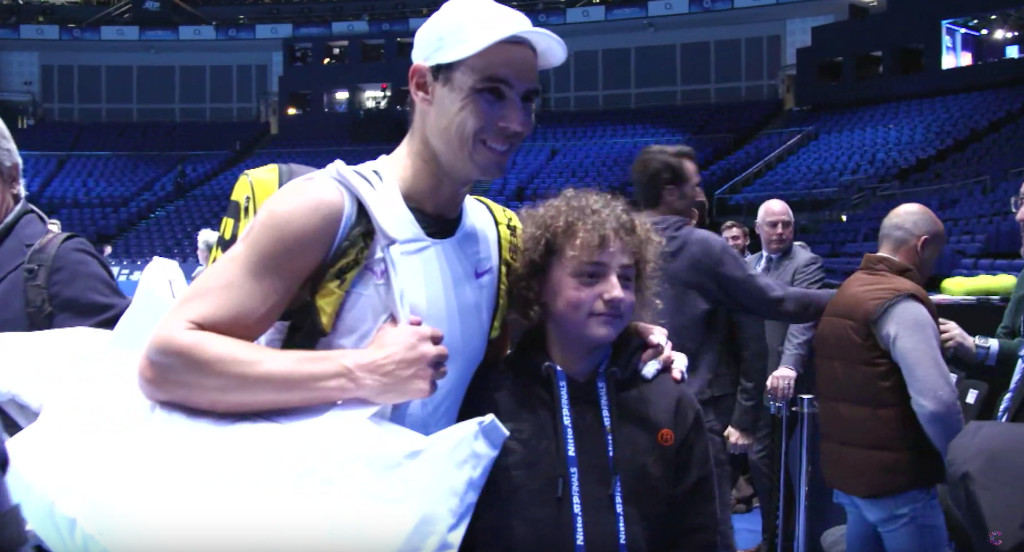 World No 8 Matteo Berrettini gave 13-year-old tennis fan Darwin Hutchinson, from Rotherham in Yorkshire, the surprise of his life in a special meeting organised by Cancer Research UK and the Nitto ATP Finals.

Darwin, who’s grown up watching and playing tennis, was diagnosed with bone cancer (Ewing’s sarcoma) in his pelvis, spine and lungs when he was only four-years-old and went through a year of chemotherapy and 30 doses of radiotherapy.

Now, nine years on, he is in remission and despite long-term side effects including curvature of the spine, scoliosis and one leg being slightly shorter than the other, Darwin plays competitive tennis and is also a keen Crossfit athlete, competing in the British teen championships this summer.

Darwin thought he was headed to The O2 to talk about his experience of cancer and share his story as part of the partnership between Cancer Research UK and the Nitto ATP Finals, but little did he know, he was in for a big surprise.

During his tour of the arena, Italian Berrettini surprised Darwin and invited him to come and rally with him on centre court at The O2 – showing just how far he’s come since his diagnosis, while Darwin also got to meet his favourite player, world No 1 Rafael Nadal.

Berrettini said: “It’s always good to meet the fans but I especially enjoyed meeting Darwin today. He’s been through a lot at a very young age and seeing the look on his face when I invited him down to play was great. He’s an inspiration to us all and I think he’s got a bright future in tennis ahead of him!”

Darwin started playing tennis when he still had his Hickman line attached and his parents would drive him across Yorkshire to compete in tournaments. He said: “I can’t believe I got to meet Matteo today. I love tennis and he is one of the best players so it’s amazing that I can say I’ve played with him! It’s a dream come true!

“I was very young when I was diagnosed with cancer and going through my treatment was really tough but I didn’t let it stop me chasing my dreams. I’m looking forward to watching the tournament this week and one day I’d love to play here too!”

Angela Hutchinson, Darwin’s mum said: “Darwin had no idea about the surprise but seeing him play with Matteo was just wonderful. When Darwin was diagnosed he could hardly walk, but he was incredibly strong and playing tennis really helped him gain the strength and confidence to recover. He never complains or uses his diagnosis or side effects as an excuse, and I couldn’t be prouder of his achievements and how far he’s come.”

The Nitto ATP Finals and Cancer Research UK have teamed up to raise awareness of cancer and the need to find new treatments that cause fewer long-term side effects.