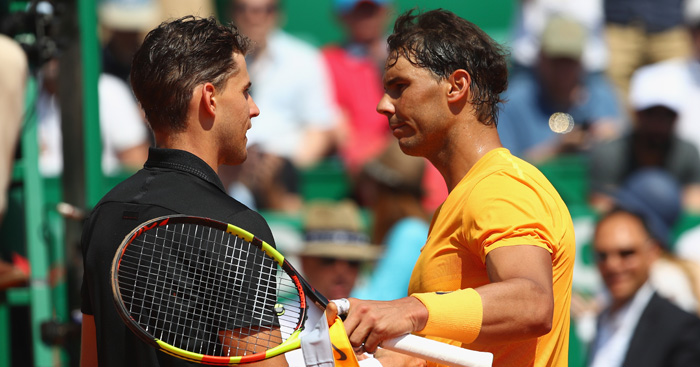 Rafael Nadal continued to dominate in Monte Carlo after crushing Dominic Thiem in the quarter-finals.

The ten-time champion needed just over an hour to see off Austrian Thiem with a 6-0 6-2 success.

Thiem, who defeated Novak Djokovic in the previous round, looked out of sorts and weary from the off, producing 25 unforced errors throughout the match.

The Bulgarian edged the first set but was 5-1 down in the second. However, he won five games in succession – saving three set-points along the way, to force a tiebreak before sealing a  6-4 7-6 (7/5) victory.

There was less joy for second seed Marin Cilic, who crashed out of the competition following a three-set defeat to Kei Nishikori.

Nishikori recovered from failing to take three match points in the second set to progress to his first ATP World Tour Masters 1000 semi-final in 20 months with a 6-4 6-7 (1/7) 6-3 victory.

The Japanese’s reward for his hard-fought win is a last-four encounter with German Alexander Zverev.