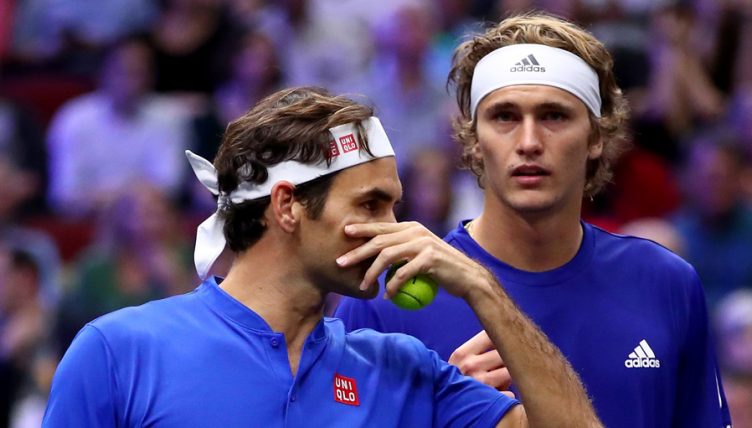 Roger Federer helped coach Alexander Zverev to a crucial Laver Cup win, with the German admitting how big an influence it was on his performance.

Team Europe needed just one more win to retain the title, but with Zverev a set down to Kevin Anderson it appeared like there would be an all-or-nothing final match to decide the winners of the coveted trophy.

However, that’s when Federer intervened, coaching Zverev on his on-court positioning before watching him turn the match around and ensure a European victory.

“Roger is not a good coach,” Zverev laughed before admitting: “He helped me a lot. He gave me some tactical advice and it worked.

“I won the second set and I won the match tie-break. It was a team effort, everyone supporting, the energy was unbelievable.

“It was a pleasure to play here and I hope one day the Laver Cup will come back to Chicago.

“It was an unbelievable weekend. We all love it, we enjoy it so much we want to play it every weekend but unfortunately we have other tournaments to play in.”

Zverev had been Federer’s doubles partner earlier in the day. However, with the pair losing to John Isner and Jack Sock, Zverev admitted to feeling a degree of pressure from not wanting to let the Swiss legend down.

“I felt like everything we did in the doubles was my mistake. Roger does a double fault and it’s my fault!” Zverev joked.

“I tried to keep up with him but it was a great experience. We lost the match tie-break but we made up for it in the end.”

“You can return from where Bjorn [Borg, Team Europe’s captain] said or you can find your return position.

“But once the rally gets going, you have to remind yourself to keep your position or move forward. Stop moving back and back and back.

“That’s why he’s able to get all these volleys because he has too much time, he gets a metre or two closer to the net.

“He gets a split second more time to get his legs in position or to run around, all this stuff.

“If you get closer to the baseline he won’t have that time. That’s my opinion.

“You slice and you come back so just stay in that position. Then you can also see the short balls.

“Back there you don’t have any short balls anymore so it’s hard to stay offensive.”