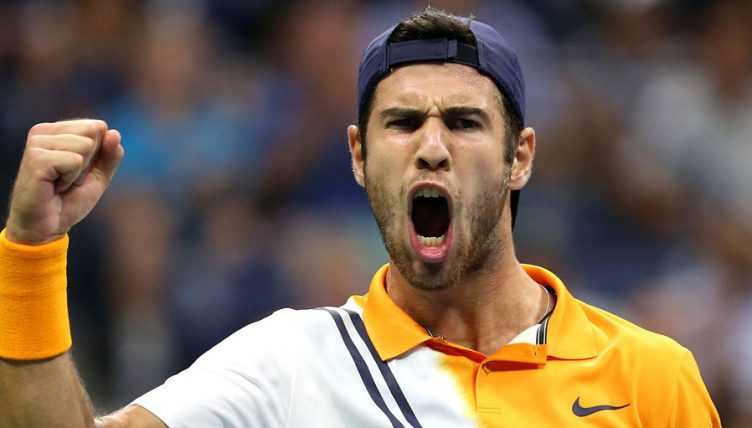 Greg Rusedski believes the next generation of tennis superstars may be ready to make breakthrough next season, as he identified the two players he believes are ready to shine in 2019.

In an exclusive interview with tennis365.com, the former US Open finalists believes Novak Djokovic will start the next tennis year as the favourite to win all four Grand Slam events, but he suggests the two rising stars who beat him in the final two events of this year have given a hint that a new dawn may be arriving after so many years of dominance from a pack of champions that has included Rafael Nadal and Roger Federer.

Alexander Zverev’s stunning straight sets win against Djokovic in the ATP Tour finals last weekend and Karen Khachanov’s victory in the Paris Masters final a couple of weeks earlier confirmed that the world No.1 is not invincible and Rusedski suggests the shaking of his aura is crucial to the chasing pack.

“We have been waiting a few years for one of these youngsters to make a breakthrough and now we are seeing some evidence that two guys are knocking hard on the door,” Rusedski told us.

RELATED: Roger Federer reveals which two points hurt him the most in 2018 season

“The era of Djokovic, Nadal and Federer is not over year and we have see that in 2018 as those guys won all the majors again, but they cannot go on forever and I believe tennis will have a bright new era with the players coming through.

“One of these youngsters is going to come along and do something special and what we saw from Karen Khachanov winning the final Masters event of the season suggests he could be ready to take the next step.

“We are also waiting to see what happens with the Zverev and his decision to bring in Ivan Lendl as his new coach could be exciting in 2019. He played so well at the ATP finals in London and that may be something of a breakthrough for him as he looks forward to next year.

“Sometimes young players need a moment to convince themselves that they can play at the top level and Zverev has had a few of those moments in 2018, so we can expect a lot more from him now. Don’t forget, he is only 21 and has a lot of years ahead of him in the game.”

Rusedski believes the quality of the the three players who have dominated the tennis landscape for a decade and more has made it tough for their younger rivals to believe they can topple them in the biggest tournaments, but he feels that attitude can change next year.

“We cannot discount the younger generation,” he added. “They need to show the desire to match their talent, but I feel at least one of them will make that step next year, but Djokovic is setting the bar very high for them.

“You look at Novak, Rafa and Roger and not only are they wonderful players, but they are also incredible athletes and have shown so much dedication for so many years. It is the combination of so many factors that has made these guys special and I believe the when they finish their careers, they will statistically be the best three players of all-time.

“Tennis will miss them when they are gone, but we had the same conversations when Pete Sampras and Andre Agassi came to the end of their careers and look at what was around the corner with Novak, Roger and Rafa.

“Sport moves on and while these three incredible champions have been great for our sport, there will be more players around the corner and I would predict that the interest in tennis will not wane when the next generation of champions come through.”