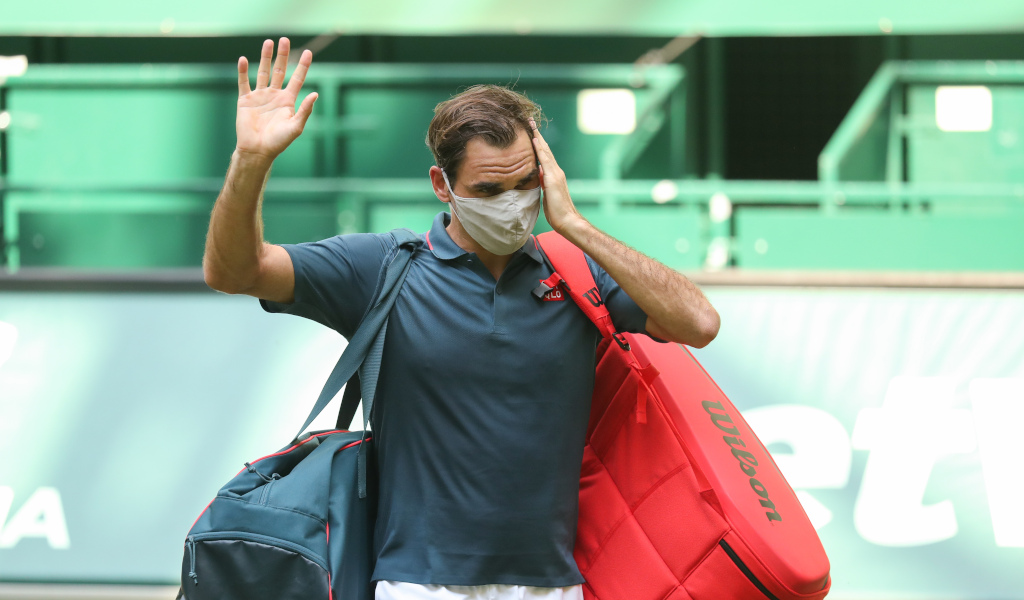 He decided to delay his post-match press conference after his surprise defeat on the grass in Halle as he “needed time to digest” and once Roger Federer spoke to the media he admitted he was far from happy with his performance.

Playing in only his second match on grass since 2019, Federer suffered a 4-6, 6-3, 6-2 defeat at the hands of up and coming youngster Felix Auger-Aliassime.

The loss put a major question mark over his Wimbledon chances with the start of the grass-court Grand Slam only a week away.

Instead of rushing to fulfil his media duties after the match, Federer delayed his press conference by two hours as he needed time to regain his composure.

And when the 20-time Grand Slam winner finally did talk to the media, he was far from happy.

“Today I felt I needed time,” Federer, who is a 10-time Halle champion, said. “I needed time to digest. The third set, I was unhappy about how it how it ended. You know, similar to Geneva and in some ways where I felt like I played actually good in spells but it was up and down.

“I’d rather keep it simple and short in the press today. I’d rather take my time coming into the press and not just doing it sweaty, heated. Not sure what I’m going to say and just, you know, say wrong things to you guys.

“So that’s the reasons and I mean it was good moments and bad moments in that match so it’s a bit up and down but that’s, I guess, part of the comeback.

“I thought the first it was really good actually. The second set was okay. I guess I got disappointed in myself that, you know, I was allowing the points to be played the way they were being played and, obviously, he was serving well in spells.

“I think I was able to actually return better again also through a period of time but then at the end things went very quickly but it had a lot to do, I believe, with where I was at.

“I just think the consistency of point for point has not been easy for me, since in the in the comeback and I knew that that’s what it’s going to take time.

“But, again, the good thing coming out of a match like this against a great player, is that I know what I need to think about, you know, moving forward, because clearly I need to do a bit better.

“Overall, I thought also Felix played a great match. He stayed mentally very solid. He showed that he wanted to win and he was better at the end so maybe it would not have made much difference to how I would have played that he would have still got me today.

“And Halle can be tough to play. You know I’ve always struggled here in the early rounds sometimes because baseline rallies are tough to blame. You got to be very focused, committed, and sharp and I was not that anymore in the third set.”

Federer’s frustrations were clear to see during the deciding set against the Canadian and he concedes his usual standards were lacking.

He added: “[It] was not a good attitude from my side, I was disappointed in the way I was feeling on court, the way things were going.

“That you know I’m not getting better spells and all that stuff I just think the, you know the whole difficulty of the comeback got to me as well a little bit.

“How much I have to push on every point, try to make things happen and I realised it was not going to be my day, there was nothing I can do, I started to get really negative, you know, and this is not normally how I am, by any means.

“So I think this is not something I’m happy about and proud about but at the same time, I looked at my whatever 1500 matches I played these things.

“The good thing is that I know it will not happen the next time around. And the next time and the next time that I’m going to be on court. That’s also one of the reasons I wanted to take the time between the match and the press conferences to truly understand why did I feel this way.

“Speak to Ivan [Ljubicic, his coach] a little bit and just figure it out and then, you know, straightaway, head up, look forward. Don’t take any silly decisions right now, just stay positive and then we take it on to the next, next goal, which is clearly Wimbledon. So we’ll see then when I come back to Switzerland what the schedule is with training and all that stuff but today was disappointing no doubt.”