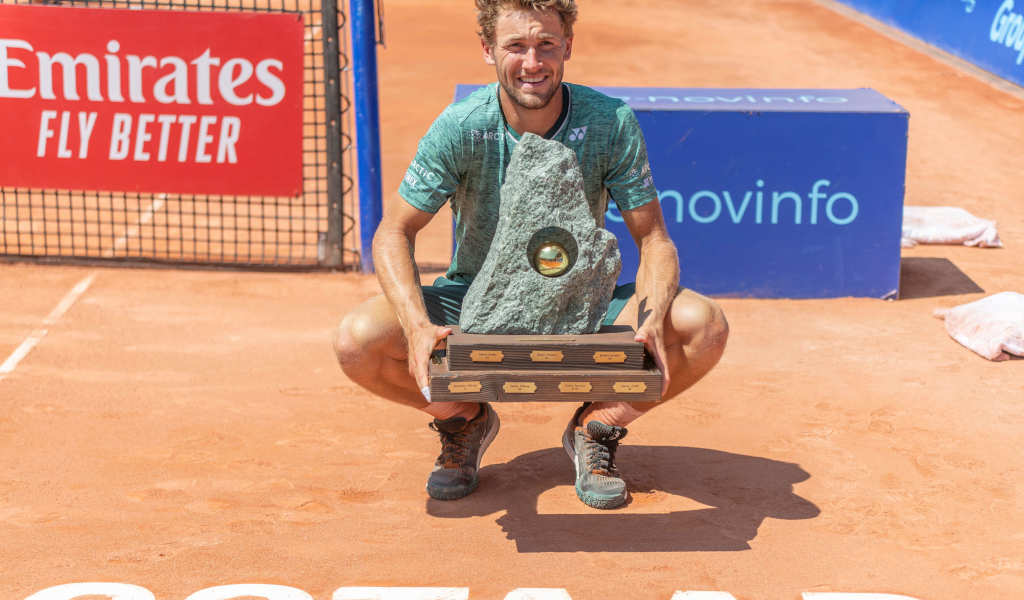 Shania Twain has known a few guys who thought they were pretty smart but they haven’t won the Swiss Open Gstaad twice like her good friend Casper Ruud.

Ruud was able to impress the notoriously finicky country and pop artist in a previous outing in Gstaad, and met with Twain during that earlier visit to the Swiss town.

Twain was happy to see her favourite lift the trophy and posed with the French Open finalist as he celebrated the triumph.

Ruud was equally impressed by the devotion of Twain.

“I really appreciated that she came back this year and supported me in the final,” Ruud said. “It was nice to see her again.”

Ruud needed to dig deep to overcome Matteo Berrettini in the championship match.

“I changed [things] up a little bit in the third set especially, which helped,” said Ruud when asked how he had completed his comeback win.

“The games and the points go by here fast. If you are not ready and focussed, you can get broken or you can break, because the conditions allow you to.

“So it was key for me to hold my serve, I did that in the second set. Saving those break points was very important for me and everything went in my favour in the tie-break.

“So that was a bit fortunate. I just tried to keep that momentum going in the third set and I was able to get a break and play better and better throughout the third set.”

Ruud says that Swiss player’s success has been an inspiration for him as a Norwegian.

“I think Switzerland is a country with a lot of history now in tennis, winning a lot of Grand Slams with Roger [Federer] and Stan [Wawrinka] the last 18 or 19 years,” said Ruud.

“So it’s been an inspiration to everyone around the world, including myself, that they are able to come from a small country, sort of like Norway. Everything about Switzerland reminds me a little bit about Norway.”