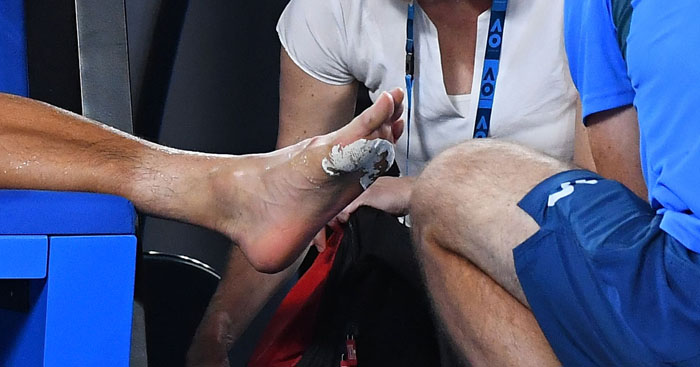 In Tennis Today, we learn about the existence of gruesome sticky plasters, and take a wander around the rest of the Tennis world.

Marin Cilic was in fine form in ending Kyle Edmund’s Australian Open run at the semi-final stage, and we took an analytical look at how he overpowered the young Brit in his maiden Grand Slam semi.

While we are on the subject of Cilic/Edmund, we have a quite lovely gallery from the game featuring a stunning Melbourne sky.

We have Carolina Wozniacki and Simona Helap preview their Australian Open final, which also contains them claiming a brilliantly unique piece of history.

Finally, there’s a real ‘look away’ moment for Tennys Sandgren, who has been forced to react to a six-year-old tweet that has probably kind of spoiled his Australian Open experience for him.

Greg Rusedski was on Eurosport covering Roger Federer’s Australian Open semi-final with Hyeon Chung and he made a controversial claim.

The former US Open finalist said that only Rafael Nadal has ever been able to find and expose weaknesses in Federer’s game.

Is that a fair observation? Maybe tell us in the comments section.

The Daily Star, meanwhile, promised ‘gruesome pictures’ that show why Hyeon Chung had to retire against Roger Federer.

Turned out, they were just pictures of a grown man with a plaster on his foot.

The ATP celebrated Australia Day by tweeting an entertaining video of tennis players attempting to use Aussie slang.

Caroline Wozniacki, meanwhile, was in celebratory mood after reaching the final.

Gael Monfils, on the other hand, just wanted to show off his dance moves. Fair play.

The women’s final and men’s doubles take centre stage at the Australian Open and you can catch them on Eurosport.