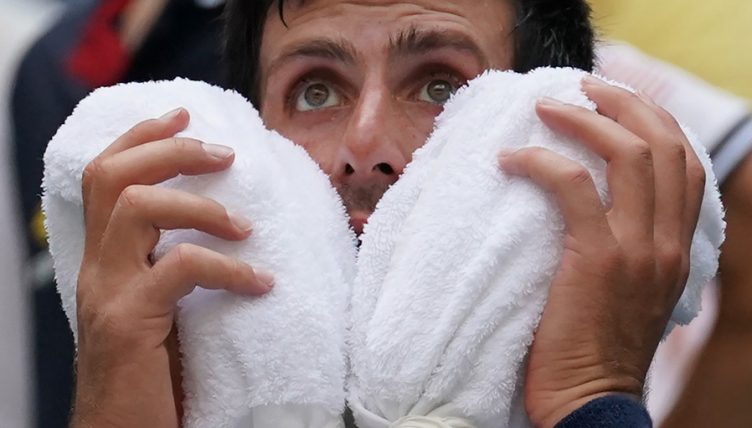 History was made at the US Open on Tuesday as an Extreme Heat Policy was implemented with temperatures approaching 100 degrees.

The policy meant that, just after 1pm local time, the USTA released a statement announcing that men would be offered a 10-minute break after the third set in affected matches.

WTA Tour rules already cover the possibility of extreme heat, but the ATP Tour does not.

Novak Djokovic’s match against Marton Fucsovics was the highest profile match to be affected, with the Serb requiring medical attention court-side for heat exhaustion.

“I want to thank the US Open for allowing us to have the 10-minute break, because we both needed it,” Djokovic said on court after his four-set victory.

“The rule was that we weren’t allowed to speak to any of our team members in the locker room.

“Marton and I were in ice baths, one next to the other. We were naked in the ice baths and it was quite a wonderful feeling.

There were a spate of retirements through the day as the heat gripped competitors.

Stefano Travaglia quit against Hubert Hurkacz and Leonardo Mayer followed suit against Laslo Djere. Shortly after, Ricardas Berankis withdrew against Hyeon Chung with the tournament referee citing the cause as “heat illness”.

Travaglia said after his retirement: “At the end of the third set I asked for the physio.

“After I had treatment I just could hardly move. I couldn’t walk straight. After one or two games I started cramping, but that wasn’t my main problem.

“I didn’t want to take a risk. I tried to play tennis, but when I was two sets to one down and two breaks down in the fourth set I didn’t think it made any sense to carry on.”

“I think the temperature was 36C or 37C, but it felt even hotter than that on court.

“When you have only 25 seconds between the points, with this weather and a lot of humidity, it’s not possible.

“It was really difficult for all the players.”