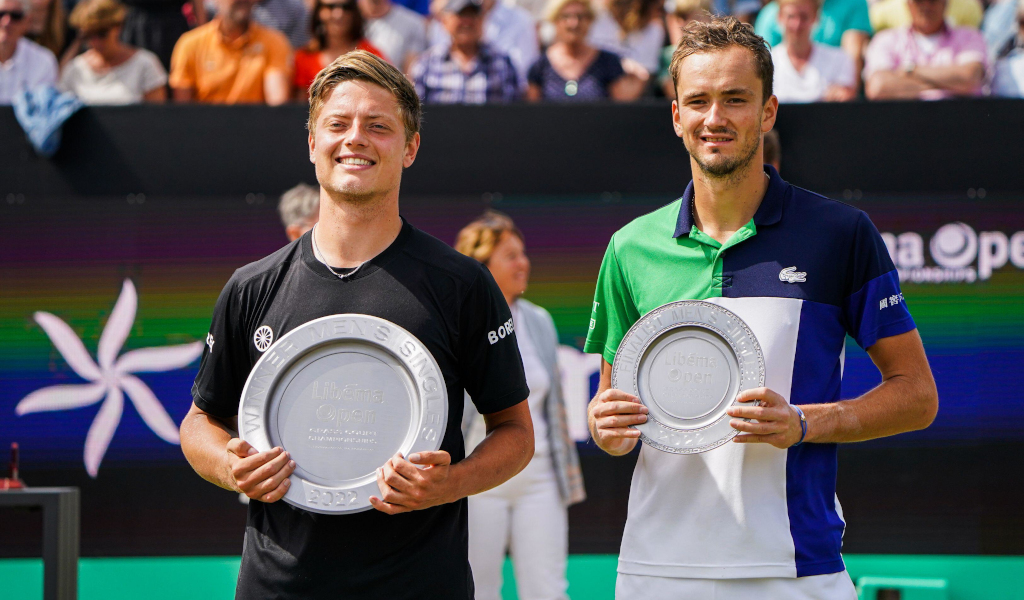 Daniil Medvedev could see the lighter side of things after he was “destroyed” by world No 205 Tim van Rijthoven in the Libema Open final.

World No 2 Medvedev started the match in s-Hertogenbosch as the overwhelming favourite on Sunday as he was up against a player competing in his maiden ATP Tour event.

Yet, the Dutch wildcard dominated proceedings as he won 6-4, 6-1 in just 65 minutes.

After trading breaks early in the first set Van Rijthoven claimed a decisive break in game 10 and then dominated the second set. He had the chance to bagel Medvedev as he had a match point at 0-5 in game six, but the US Open champion saved it only for 25-year-old to seal the match on his own serve.

“This is new for me, it’s going to take some time getting used to,” Van Rijthoven, who also beat second seed Felix Auger Aliassime and third seed Jack Sock on his magical run, said.

“What a dream this week. I would like to thank my team for staying humble this week, doing the normal things, not making this thing any bigger than it was.

He added: “I would like to thank all of you. Your support was incredible this week.”

Van Rijthoven has jumped 99 spaces in the ATP Ranking and is now up to No 106.

Medvedev, who has returned to No 1 in the rankings, managed to crack a joke during the post-match presentation.

“Amazing week. [You] destroyed the No 2 in the world in straight sets in the final, so I think it must be a good feeling!” he said.

“An amazing match today. Keep it going. I remember you from juniors, you have the talent so now you need to make more matches like this and more tournaments like this! Congrats to you and your team.”