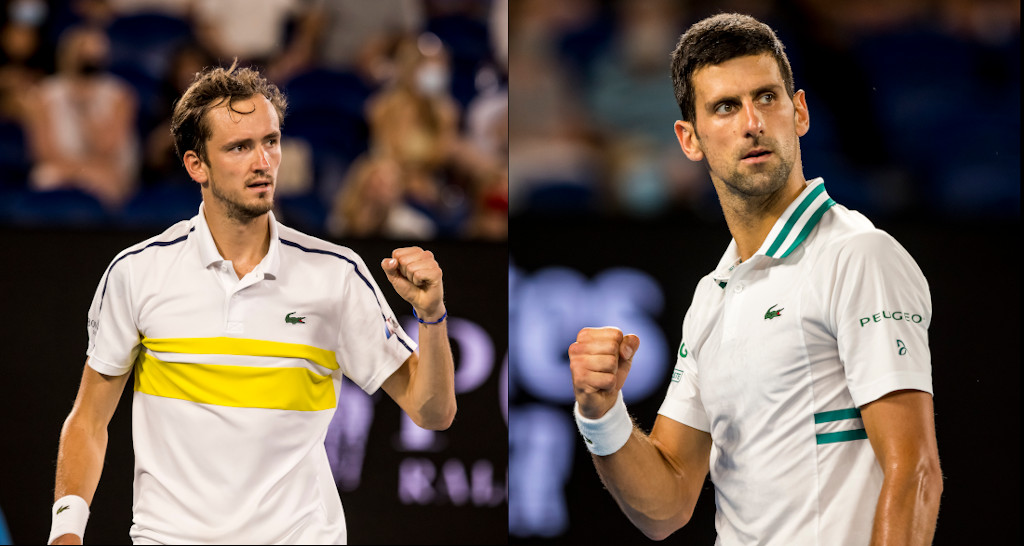 Novak Djokovic will be gunning for a record-extending ninth Norman Brookes Challenge Cup and a 20th Grand Slam trophy, but the impressive Daniil Medvedev stands in his way in the 2021 Australian Open men’s final at Melbourne Park.

We give you the lowdown ahead of Sunday’s showpiece match on Rod Laver Arena.

Something has to give in the Australian Open final as both Novak Djokovic and Daniil Medvedev are unbeaten in 2021 as they were also undefeated in the singles at the ATP Cup.

However, Medvedev’s unbeaten streak is up to 20 matches as he won the ATP Finals and Paris Masters at the backend of 2020.

The Russian’s scalps at Melbourne Park include Stefanos Tsitsipas in the semi-final and Andrey Rublev in the quarter-final. The only time he dropped a set was in the third round when Filip Krajinovic took him to five sets.

It feels a bit bizarre, but Djokovic has been tested over and over again at Melbourne Park as he came through four sets against Frances Tiafoe in the second round, went the distance against Taylor Fritz in the third round, took four sets to beat Milos Raonic in the fourth round, another four sets to see off Alexander Zverev in the quarter-final before finally putting together a three-set win over Aslan Karatsev in the semi-final.

Djokovic leads the H2H 4-3, but it Medvedev has made inroads into his lead in recent years.

The Russian won their most recent encounter at the 2020 ATP Finals, beating the Serbian 6-3, 6-3 in the round-robin phase at The O2 Arena while the world No 1 won a three-setter at the start of 2020 at the ATP Cup in Melbourne.

There won’t be any holding back when these two face off! 🔥🔥@DjokerNole | @DaniilMedwed | #AusOpen pic.twitter.com/Lxks18wnQH

Djokovic had won their first three encounters – Davis Cup in 2017, Nottingham 2017 and Australian Open in 2019, before Medvedev hit back with wins at Monte Carlo and Cincinnati in 2019.

There has been a lot of talk about the new generations coming and taking over from the three of us but realistically that isn’t happening still but we can talk about it all day.

With my respect to all the other guys, they still have a lot of work to do. I’m not going to stand here and hand it over to them. I am going to make them work their ar*e off for it.

I like that I don’t have a lot of pressure because he never lost in eight times that he was here in the final. It’s him that has all the pressure, getting to Roger, Rafa in the Grand Slams.

I just hope that I’m going to get out there, show my best tennis. He has for sure more experience but more things to lose I think.

For once it is a tough one to call, but most bookmakers have Novak Djokovic at 5/6 to win a ninth Australian Open trophy and that will take his Grand Slam tally to 18 while Daniil Medvedev is evens.

Bet365 has Djokovic 7/2 to win in three sets with Medvedev 4/1 to win a three-set final. However, if it goes the distance then both players are 5/1 to lift the Norman Brookes Challenge Cup come the end of Sunday evening.

Both players to win a set at 15/8 seem like a decent call.

This is one of the toughest Grand Slam finals to call in recent years as do you go with overall history or recent history? Novak Djokovic is unbeaten in eight Australian Open finals while Daniil Medvedev is unbeaten in 20 matches.

The bookies have gone for Djokovic, but the long hours on the court and the abdonimal niggle could count against him on Sunday.

Medvedev, by contrast, has looked smooth the past fortnight and seems unflustered these days