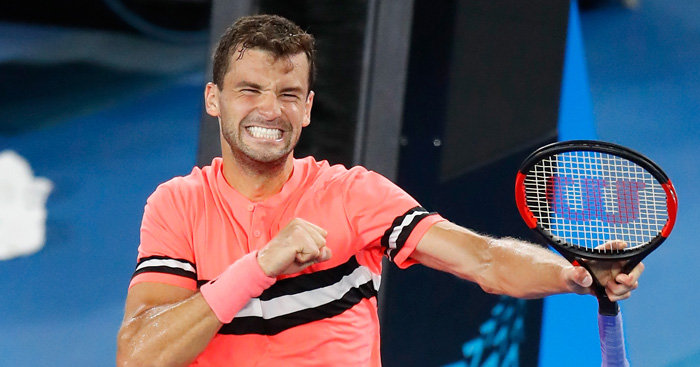 Grigor Dimitrov got the better of a fierce struggle against Nick Kyrgios to set up a clash with Kyle Edmund in the Australian Open quarter-finals.

The third seed said: “Playing against Nick is always tricky. Two weeks ago I lost against him. He was serving unbelievable, playing unbelievable, competing. He fought really hard. He deserves a lot of credit. You have to be locked in and try to take any opportunity you have. I’m just glad to come through that match.”

Dimitrov beat Edmund two weeks ago in Brisbane, although it was nip and tuck until the British number two turned his ankle late in the third set.

“It’s just another match that I need to go through,” Dimitrov said. “I’m just really focused on my side of the court. Today I’m happy I switched on a gear and was playing better and better. Hopefully next match I can do better still.”

Kyrgios appears to have largely won over a sceptical Australian public with his professional attitude this tournament, focusing throughout matches and showing that he does care about tennis after all.

He went into this clash on a seven-match winning streak, which included victory over Dimitrov in the semi-finals of the Brisbane International earlier this month.

The Bulgarian was agonisingly close to beating Rafael Nadal in the semi-finals here 12 months ago and finished off last season by winning his biggest title at the ATP Finals.

But he struggled for form during his first three matches, needing five sets to defeat American qualifier Mackenzie McDonald in round two and serving 15 double faults against Andrey Rublev last time out.

He needed to step up to have a chance against Kyrgios, and he did, showing the all-court talents that once saw him labelled as Roger Federer’s natural successor.

At a set and a break up, with Kyrgios ranting at his support camp about the tension of his strings and threatening to implode, Dimitrov appeared in total control of the match.

Serving at 5-3, his arm tightened and Kyrgios pounced but Dimitrov hit back strongly in the tie-break to move to within a set of victory.

The comeback had given Kyrgios encouragement, though, and he played a tremendous third set, upping the power levels and pulling off the sort of outrageous shots only he can.

Rod Laver Arena believed he could turn it around but Dimitrov piled the pressure on in the fourth set and eventually got his reward when Kyrgios netted a routine smash on break point at 3-4.

As he had done in the second set, though, Dimitrov played a poor game serving for it and back came Kyrgios. The Australian has a great record in tie-breaks but he had no answer to his opponent here and Dimitrov celebrated with glee.