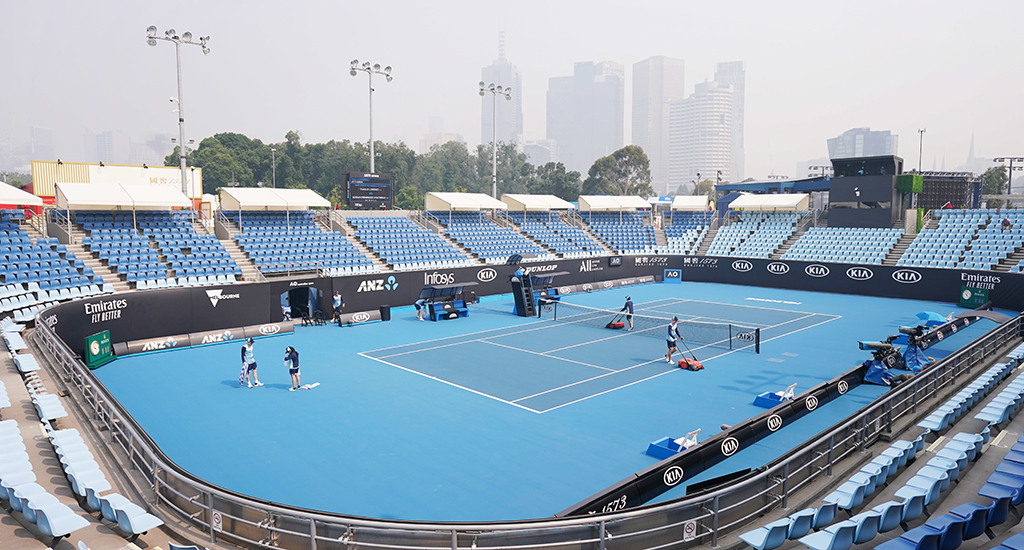 Eugenie Bouchard and Maria Sharapova have joined the chorus of players hitting out at conditions as smoke from the Australian bushfire crisis engulfed Melbourne, where Australian Open qualifying is underway.

Qualifying matches had to be stopped on Tuesday, with Dalila Jakupovic forced to retire from her match after suffering a horrendous coughing fit.

Bernard Tomic also needed a special inhaler after admitting he ‘just couldn’t breathe’ in his defeat to Denis Kudla.

Bouchard won her match, but admitted it was far from straight forward from a medical point of view.

“By the end of the second set it was tough to breathe,” Bouchard said afterwards.

“I got the physio and she gave me some stuff that helped. It’s not ideal to play in these conditions.

“I’m never one to stop playing but I definitely started to feeling unwell and I had to call the trainer because it was tough to breathe.”

Sharapova, meanwhile, was playing an exhibition across the city against Laura Siegemund, and the match had to be suspended due to the conditions.

“I started feeling a cough coming toward the end of the second set but I’ve been sick for a few weeks so I thought that had something to do with it.

RELATED: Smoke takes its toll at Australian Open qualy: ‘I just couldn’t breathe anymore and fell on the floor’

“But then I heard Laura speak to the umpire and she said she was struggling with it as well.

“We were out there for over two hours so from a health standpoint it’s the right call from the officials.”