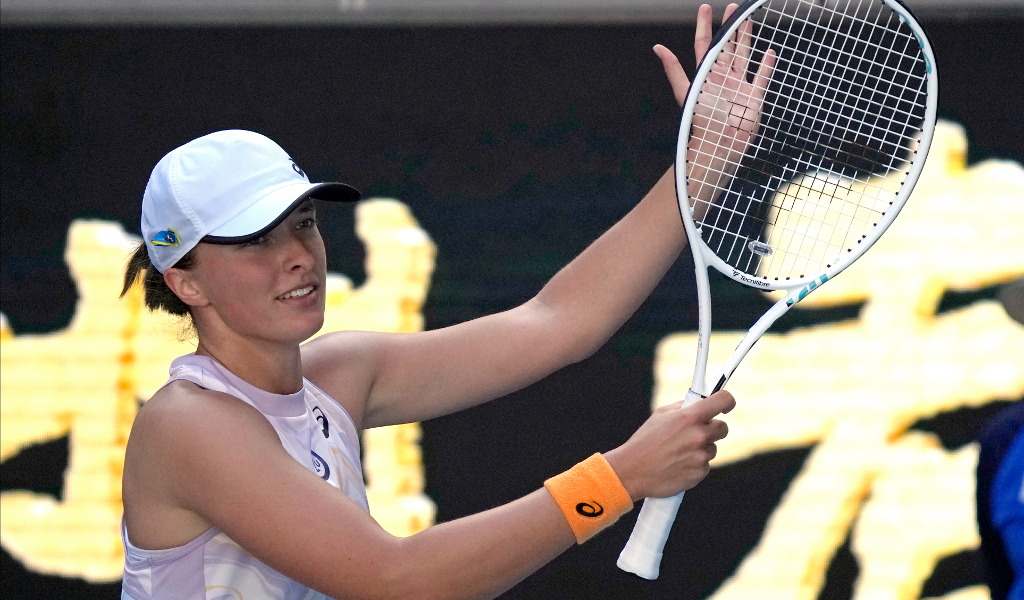 World number one Iga Swiatek advanced to the Round of 16 at the Australian Open after a one-sided victory over Cristina Bucsa on Margaret Court Arena.

Spaniard Bucsa had to go through the gruelling qualifying tournament to get to the main draw, and reaching the third round was already something of a success for the 25-year-old.

But she was no match for the world’s best player, whose intensity was unmatched as she claimed a 6-0, 6-1 victory to set up a match with Kazakhstan’s Wimbledon champion Elena Rybakina for a place in the quarter-finals.

“I felt like I’m in a little bit of a flow so that’s nice,” Swiatek said post-match.

“I always try to focus on the same stuff, pretty technical stuff. It doesn’t matter if I’m winning or losing, it’s all the same to help me to stay disciplined. That’s all basically. I don’t try to over analyse it.”

“I’ve always wanted to be that kind of player who is consistent so I’m pretty happy that I’m achieving that goal. I just remember how it was a couple of years ago. When I was in the fourth round I was really exhausted and right now I feel like this is the right place to be.”

Swiatek had bagled in the opening set and didn’t give the Spaniard an opportunity to settle into a rhythm.

The second set followed much the same pattern, although there were some cheers from the crowd when Bucsa held serve to make it 5-1 in the second. That was as good as it got for her.

Swiatek is displaying the form that made her the pre-tournament favourite, although she will face a much tougher challenge in the next round against Rybakina.

“For sure she’s very strong physically and mentally,” Rybakina said of the world number one.

“I will have to take all my chances. I think Iga is a great player.”

Earlier, third seed Jessica Pegula claimed a 6-0, 6-2 win over Marta Kostyuk in her third round victory, to underline her title credentials.

The 23-year-old Pegula is yet to drop a set at the Australian Open and moves into the fourth round having conceded just 11 games across six sets of tennis.

“I thought I just didn’t give away a lot of free points,” Pegula said in her on-court interview.