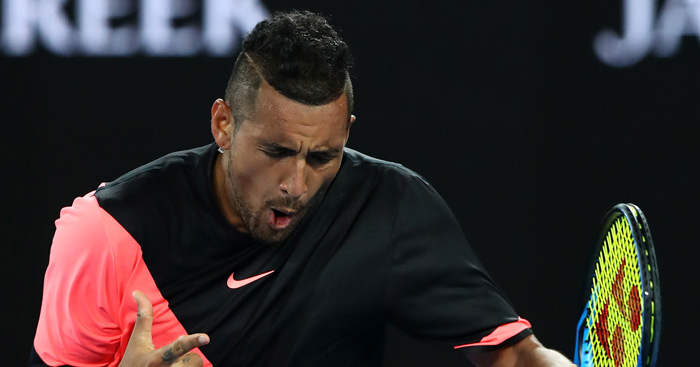 Nick Kyrgios admitted it was a personal thrill to beat his childhood hero Jo-Wilfried Tsonga in the third round at Melbourne Park.

Kyrgios attended the 2008 tournament, when Tsonga reached the final, as a 12-year-old fan and took a ball to each of the Frenchman’s practice sessions to get autographed.

Kyrgios had a bit of a letdown in the second set but proved the king of the tie-break, winning five points in a row in the final one and celebrating his victory with an exuberant pump of the fists.

“It was amazing,” he said. “I’d never won a match on this court. Playing Jo I was obviously very nervous. He was a guy I looked up to as a kid, still do, he’s a champion of the game.

“I was getting prepared for a fifth set. I just stayed composed, tried to make returns and fired it through. I’ve got doubles tomorrow and then I’ve got a tough match against (Grigor) Dimitrov.”

Kyrgios felt added tension because of the presence court-side of Hollywood star Will Smith. “I was so nervous when I saw him,” said the 22-year-old. “People think I’m cool but I just wanted him to think I was the coolest person ever.”