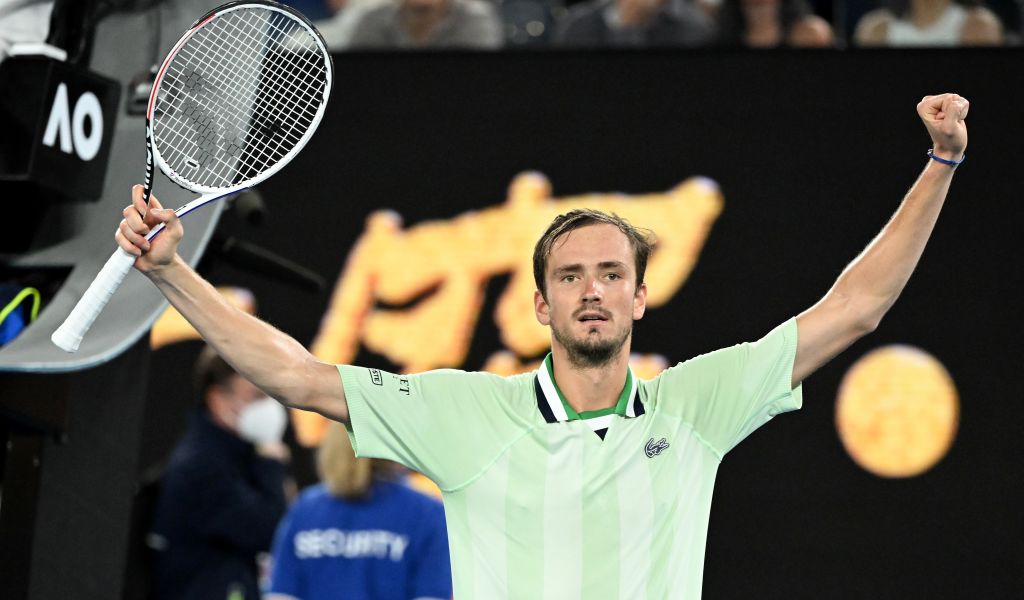 Medvedev’s 7-6 (5) 4-6 6-4 6-1 victory over rival Tsitsipas means he will play for a second successive grand slam title after his maiden success at the US Open last summer.

It is also the second year in a row he has made the final at Melbourne Park, having lost to Novak Djokovic 12 months ago.

But much of the attention will focus on Medvedev’s extraordinary rant at the umpire late in the second set, when he accused Tsitsipas of receiving coaching from his father Apostolos.

“To be honest I don’t think bad emotions helped me too much. As soon as I’ve done it, it was a big mistake,” said Medvedev of his loss of temper.

“I managed to re-concentrate and pulled out some serves and that got me back into the match – it’s a quite important match I think! I tried my best and I’m happy it worked.

“A few moments I maybe missed some balls, he missed a few and then in the third I just found some momentum and make some very important passing shots. His energy was going down and my energy was going only up.”

Looking ahead to Sunday’s final against Rafael Nadal, Medvedev suggested he was relishing the chance to play against an opponent chasing a record 21st Grand Slam for a second major final after his win against Novak Djokovic at the US Open last September.

“I’m going to play against one of the greatest and someone going for the 21st Slam,” he added.

“I guess last time Rafa was watching [the US Open final] and I don’t know who he was cheering for, I guess Novak (Djokovic) will be watching in two days time also.

“I’m ready, I know that Rafa is a very strong player and I need to show my best to try and win this match.”