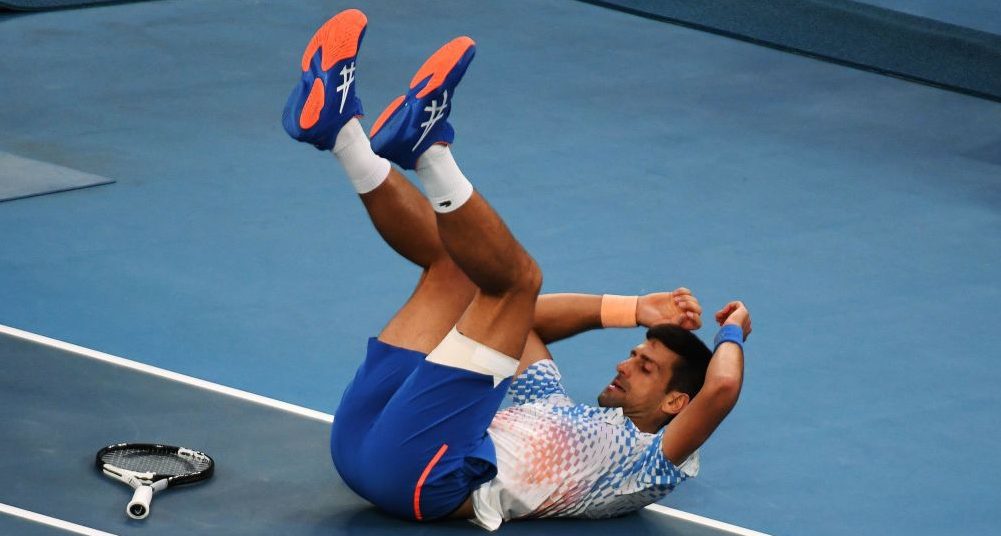 Novak Djokovic has battled through to the last-16 of the Australian Open, but the nine-time champion feared his challenge would end before he struck a ball in anger.

Djokovic continued to defy a hamstring injury as a straight-sets victory over Grigor Dimitrov sent him into the fourth round of the Australian Open.

The title favourite admitted after needing a medical timeout and dropping a set to French qualifier Enzo Couacaud that he was concerned, and a clash with 27th seed Dimitrov was a much better test of his physical condition.

He took another timeout after falling to the floor at the side of the court at the end of the first set but, despite continuing to limp and looking uncomfortable at times, clinched a 7-6 (7) 6-3 6-4 victory.

Yet this latest injury continues to be a huge concern for Djokovic, who has been honest in confirming he fears he may not be able to get through to the end of the tournament.

“It kind of always starts well and then some movement happens and then it gets worse,” revealed Djokovic.

“Pills kick in, some hot cream and stuff, that works for a little bit, then it doesn’t, then works again. It’s really a roller coaster, honestly.

“It requires a lot of energy that is being spent from my side mentally and physically, as well, to deal with the match with my opponent and also with a not-ideal physical state.

“But it is what it is. It’s kind of circumstances that you have to accept.”

He then went into detail to explain his emotions before the tournament started, as he revealed he feared he would not be able to compete.

“The way it looked just before the tournament started, I thought that it wouldn’t be possible.

“I’m still here and still holding on. I don’t know what awaits, but I do hope and I have faith for the best.”

Rumours were swirling in Melbourne on Thursday to suggest Djokovic’s hamstring injury could end his challenge for another Australian Open title.

Yet he took to the court against Dimitrov and found a way to win, despite clear discomfort and medical time-outs.

Now we wait to see whether Djokovic can continue to fight his physical issues in his next match against Aussie hero Alex De Minaur.

De Minaur, who had a comfortable afternoon against France’s Benjamin Bonzi, is not reading too much into Djokovic’s injury.

“Ultimately he’s one of the best players in the world, and I’m just going to have to take it to him and not shy away from the occasion,” said De Minaur.

“I’m going to make sure to make it as tough as I can.”

It remains to be seen whether De Minaur can push Djokovic to breaking point, but it was clear from his match against Dimitrov that he is struggling to move sideways and get to high balls.

If his next opponent can get the ball in the right place enough, he could trouble Djokovic.

From the perspective of the title favourite, his hopes appear to be hanging by the threads of his hamstring that could end his challenge at any moment.