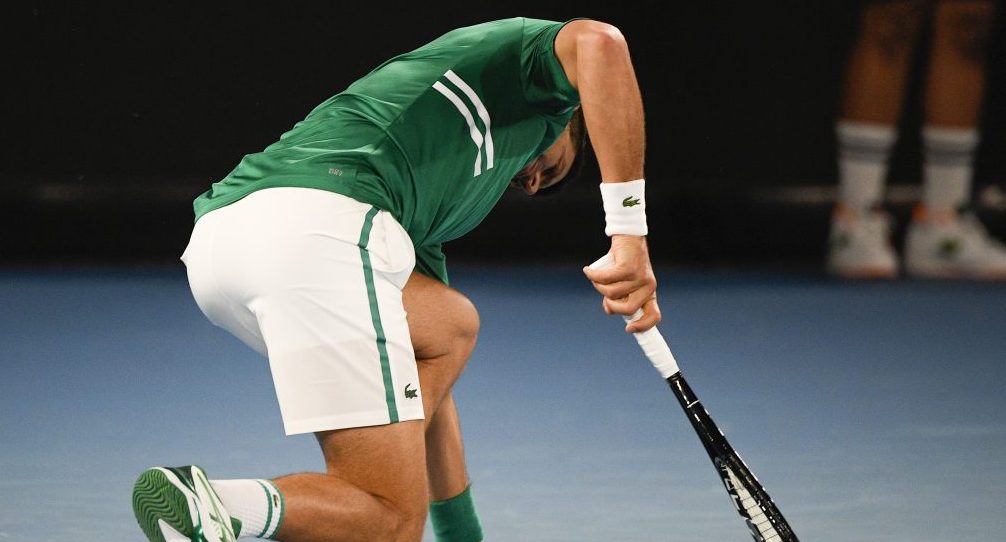 Novak Djokovic opted to skip a practice session on Saturday amid growing rumours that his future participation in the Australian Open is in doubt.

The world No.1 suggested he suffered a ‘muscle tear’ during Friday’s epic five-set win against American Taylor Fritz, as he cast doubt over whether he will continue into the second week of the first Grand Slam of 2021.

Now the defending champion is believed to be waiting on results of a scan to determine whether he can continue, with his most recent comments suggesting he doubts whether he will play his fourth round match against Milos Raonic.

“And the only possible treatment that I could even have the slightest chance to go out in less than 48 hours.

“Let’s see, I don’t know – I don’t have a great experience with tears in terms of continuing in the tournament so that’s something that is in the clouds for me at the moment whether I am going to step out in the court in two days. Hopefully, god willing, I will be able to play.”

Australian Open chief Craig Tiley backed Djkovic to make it on court on Sunday, as he suggested the defending champion would do all he can to continue.

“He’ll wake up today and he’ll figure out what it is and he’ll go and get the appropriate treatment. The way he was, those two sets, I was pretty surprised.

“But I’ve seen him play here, this is his court, he gets comfortable on it and he just picks his game up and up and he’s that good.

“So his health is going to be important and we’ll make a decision later on today on when he plays tomorrow.”

Eurosport expert and former world No.1 Wilander is also backing Djokovic to find a way to get back on court for his fourth round match, despite the doubts swirling around him.

“It’s very worrying, I guess the reaction we saw from Novak at the end is a positive because it means that he can possibly fix this injury in a way,” said Wilander.

“It does give hope to the locker room because Milos Raonic must be thinking Novak is a little bit injured. It gives the other players hope and it’s worrying times for Novak but I think the victory celebrations say it all. I think this is something he thinks he can fix.”

A decision on whether Djokovic will continue in the tournament could come early if the results of his scan confirm a torn muscle.