Novak Djokovic involved in message in a bottle debacle, but much ado about nothing? 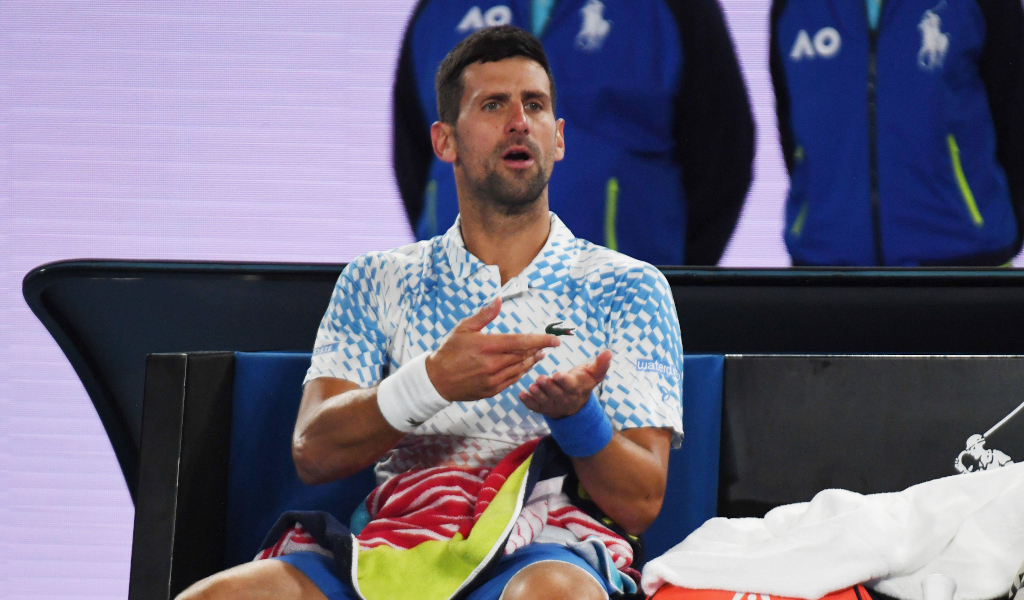 Novak Djokovic has been caught up in yet another bottle controversy and this time it is being suggested that he was handed a note during his second-round match at the Australian Open.

The 21-time Grand Slam winner took on Enzo Couacauo at Rod Laver Arena on Thursday and he emerged with a 6-1, 6-7 (5-7), 6-2, 6-0 win but it was a tougher battle than the scoreline suggests as the fourth seed struggled with injury.

He needed a medical timeout to get treatment on a hamstring injury that has bothered him throughout the tournament.

And now footage has emerged of Djokovic’s team handing a water bottle to an official to pass on to the Serbian, which is all above board. However, there appears to be a note on the bottle and Djokovic carefully reads something on it.

Some believe that he received a message from coaches with many outraged as they see it as in-match coaching.

Although the official 2023 Grand Slam rulebook states that: “Players shall not receive coaching during a match (including the warm-up). Communications of any kind, audible or visible, between a player and a coach may be construed as coaching.”

There is a note that reads: “In 2023 an Off-court coaching trial will be conducted at all Grand Slam tournaments.”

This comes on the back of the 2022 announcement that off-court coaching would be trialed during the second half of the season, which was later extended to 2023.

The trial that was adopted last year had the following conditions:

● The coach must sit in the tournament’s designated coaches’ seats
● Verbal coaching is permitted only when the player is at the same end of the court
● Verbal coaching may consist of a few words and/or short phrases (no conversations are permitted)
● Non-verbal coaching (hand signals) is permitted
● Coaching (verbal and non-verbal) is allowed only if it does not interrupt play or create any hindrance to the opponent
● Players may approach their coach or engage in conversation with their coach ONLY during the opposing player’s Medical Timeout or a Toilet Break/Change of Attire Break
● Coaches may not speak to their player, when the player leaves the court for any reason

If there were instructions on the note from Djokovic’s coaching team then it would fall under the “coaching (verbal and non-verbal) is allowed only if it does not interrupt play or create any hindrance to the opponent” rule.

Back to the water bottle controversy, Djokovic was first seen inhaling something from his water bottle at Wimbledon last year and he refused to divulge more about what was in the bottle.

Then at the Paris Masters his then physio Ulises Badio was seen mixing a drink in his bottle before it was passed to Djokovic via a ball girl.

It again raised questions about what was in the bottle and his wife Jelena got involved in the online debate as she dismissed suggestions there was something “dodgy” in the bottle.

“Apparently, wanting/trying to be private makes you dodgy nowadays,” she wrote.