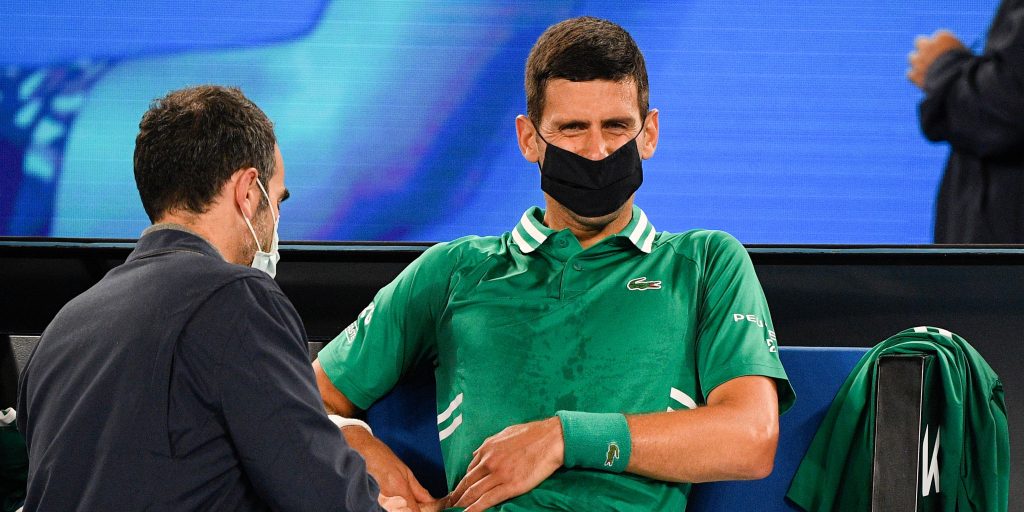 He concedes that Novak Djokovic sometimes “pretends he is giving up” when he is in trouble during matches, but Patrick Mouratoglou has dismissed any suggestions that the world No 1 or Rafael Nadal would “fake injury to take the pressure off”.

Both Djokovic and Nadal have injury clouds hanging over them during the Australian Open with the latter struggling since the ATP Cup while the former picked up his abdominal strain during his third-round win over Taylor Fritz.

World No 2 Nadal, though, has managed his back problem well and looked a lot more comfortable during his win over Cameron Norrie on Saturday.

“I have more doubt for Novak’s end of the tournament than for Rafa, who seems to be okay controlling the pain,” he told Tennismajors.com.

“You can feel that he isn’t going 100 percent and he’s trying to control what he’s doing, because he knows that if on one shot he goes too far and exaggerates the effort on the zone where he has the pain, then the injury can go to the next level and then maybe he will have to pull out.

“Mentally, it’s an incredible effort to play tennis all while trying to control your motions and not activate the zone that is in pain.

“Novak will have to do the same. For Novak I think it’s worse because it’s the abdominals, and you use the abdominals on every shot.”

Despite being in pain, Djokovic appeared to move better during his fourth-round win over Milos Raonic on Sunday evening and Mouratoglou rejected any suggestion that the players are faking injury.

“When he’s down he pretends he’s giving up, he’s not really there, and then suddenly boom he plays again.

“But he doesn’t fake an injury during a tournament. I don’t believe (for) one second that Rafa or Novak are faking an injury or exaggerating their injury to take the pressure off. I think they accept pressure, they deal with the pressure, and that’s why they are champions.”