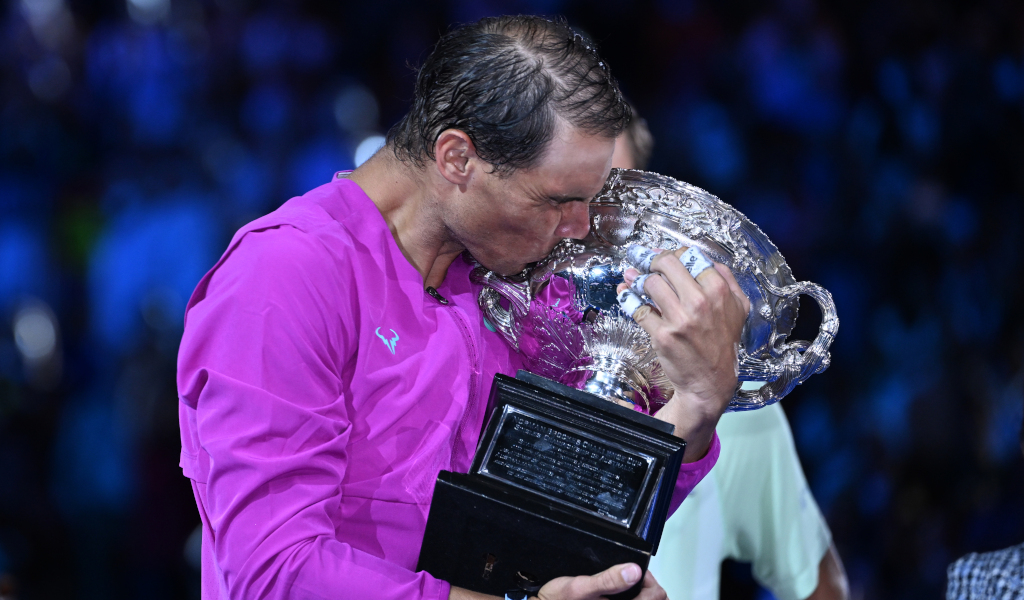 A month ago Rafael Nadal considered withdrawing from the 2022 Australian Open yet at the end of the tournament he not only found himself holding aloft the trophy, but he also became tennis’ new Grand Slam record holder after producing a miracle fightback against Daniil Medvedev.

By winning Sunday’s match on Rod Laver Arena, Nadal overtook his great rivals Novak Djokovic and Roger Federer in the race for the most majors as he became the first to 21 Grand Slams.

Medvedev, meanwhile, was denied the chance to become the first player to follow up a maiden Grand Slam – his triumph at the US Open – with another major in next tournament.

As early as the third game, it was tennis from the highest quality as the world No 2 looked to go 0-40 up, but Nadal produced a miracle forehand to take it to 15-30. And Medvedev threw everything he had at his opponent, but Nadal somehow managed to win a lengthy game.

Nothing gets past @RafaelNadal 🙅♂️

Even though Nadal won that game, it became clear that he was going to struggle on his own serve as the Russian was again all over him in game five and he broke to love to go 3-2 up and Medvedev doubled up two games later.

Another excellent hold and the first set went to the Russian in 42 minutes.

42 minutes in, @DaniilMedwed takes the first set against Rafa with a 6-2💪

The second set started with three fairly comfortable holds before Nadal conjured up some magic by winning a 40-shot rally with an exquisite drop shot to set up two break points. After Medvedev saved the first with an ace, an unforced error landed the Spaniard a welcome break.

But in a blink of an eye it was back on serve as the Russian’s tactics earned him a break without having to pull out all the stops.

Yet there was still plenty of life left in the old dog as Nadal came back out to regain the advantage as he produced a perfectly executed drop shot at 30-40 to go 5-3 up.

He came out for to serve for the second set, but it was another drawnout game and it was a case of the fittest will survive with Medvedev providing to be the fittest at that stage as he again got back on serve and it went to the tie-breaker.

Nadal twice found himself with a mini break ahead and also had a set point, but Medvedev somehow emerged victorious from the tie-breaker to go two-sets up.

One hand on the trophy 🕺

From 5-3 down in the tiebreak, @DaniilMedwed takes the second set 7-6(5) against Nadal to lead two-sets-to-love.#AO2022 • #AusOpen pic.twitter.com/CmKXHRw9me

The opening game of the third set was another protracted affair with several deuces, but Medvedev held firm.

There was still another big game left in Nadal as he came out fighting in game nine and – with Medvedev throwing in some errors – he produced a brilliant passing shot at 30-40 for a 5-4 lead.

It was clear that Medvedev was becoming increasingly frustrated with the crowd, but Nadal kept his cool as he served to love to reduce the deficit to two sets to one.

With Medvedev starting to feel the effects of the long match, Nadal appeared to be fresher and it showed as he broke in game three.

However, the Russian was not going to give up easily as he produced another brilliant return game to get back on serve and, after finding himself 0-40 down, he managed to get back to deuce. He saved six break points, but the seventh was one too far as Nadal again got his nose in front.

This time there was no comeback from Medvedev and as the 35-year-old again served it out to love to take it to a decider.

Nadal wins the fourth set 6-4 to come all the way back vs Medvedev!

After four consecutive holds and with Medvedev clearly struggling, Nadal upped the ante and fashioned a break point, but Medvedev saved the first. However, there was no denying the Spaniard the second time as his trademark forehand running winner down the line to go 3-2 up.

A couple of holds later and Nadal came out to serve for his second Australian Open title, but Medvedev was once again not done and, with the Spaniard tightening up, he got the break back.

Yet, a game later Medvedev found himself making several errors and Nadal got the break back and for a second time he had a chance to serve for the Championship. This time he got the job done – “merely” five hours and 25 minutes after the match started.

With it he became the second player after Roy Emerson, Rod Laver and Djokovic to win all four Grand Slams twice.