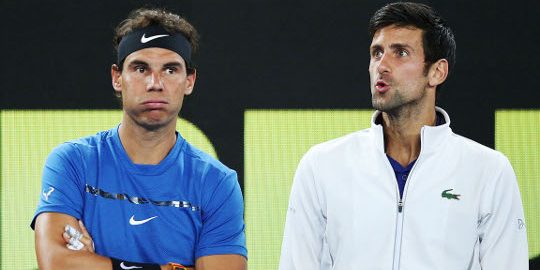 Rafael Nadal’s coach Carlos Moya believes the Spaniard has the tools to beat Novak Djokovic, but only if he can shorten the points.

The top two players in the world will meet at the Australian Open final on Sunday, with Djokovic and his famed defence seeing him get the better of Nadal in recent times.

Nadal, though, has spent the off-season working on becoming more aggressive, and Moya hopes it will pay dividends in Melbourne.

“Obviously it’s the most challenging match he can have,” said Moya. “Mentally he has an edge when he plays any player, but not with Novak.

“I think these kind of matches come down to three or four points, like happened in Wimbledon.

“That day, most of these important points went Novak’s side. Here, if some of those points go our side, I believe [Nadal] will have the chance to win.

‘I’ve been watching the match they played here (in 2012), six hours. I think he has to avoid that.

“Not only for the final but also what it takes to recover from that and the risk of injury.

“We know to play short points against Novak is not easy, because he’s one of the best movers on the tour and one of the best returners, but to me [Nadal] has the weapons to make the points shorter.’

“Since the first day I came on board, my main goal was to convince him that he could play more aggressive.”