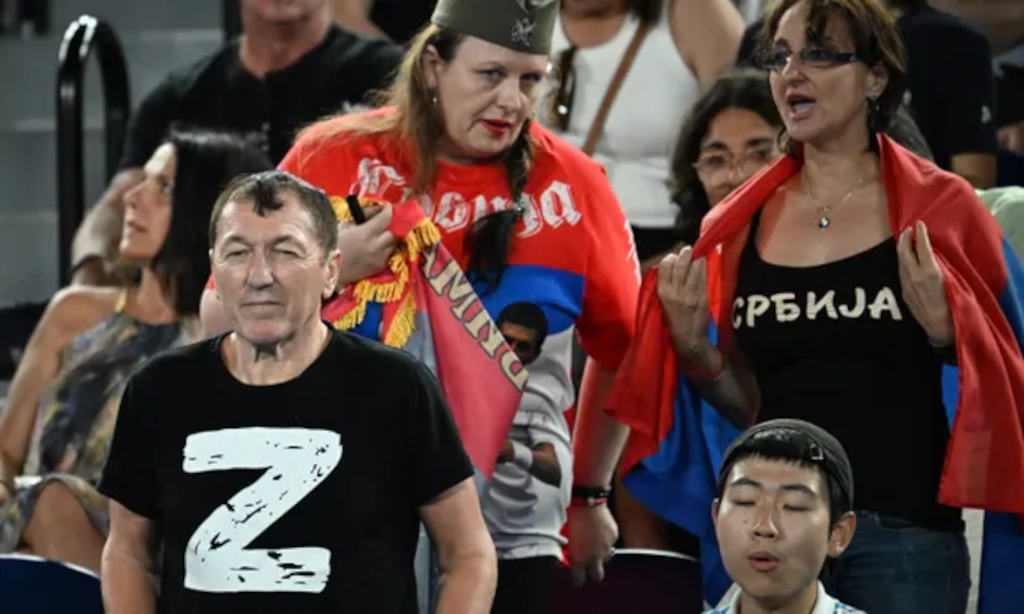 According to reports out of Melbourne, Russian fans defied orders not to display their national flag at the Australian Open.

Fans disrupted Novak Djokovic’s match against Russian Andrey Rublev, although the former World No 1 made quick work of the World No 6.

Victoria Police questioned four fans at the Australian Open tennis on Wednesday after they unfurled Russian flags, including one featuring Vladimir Putin’s face.

The group of fans are also alleged to have threatened security staff, reports claimed.

The fans, who were spotted on the steps outside the Rod Laver Arena had attended Russian fifth seed Rublev’s quarter-final defeat to Djokovic at Melbourne Park, Australian newspapers The Age and Herald Sun have reported.

The incident on stairs outside the centre court, Rod Laver Arena, where Djokovic defeated Rublev 6-1, 6-2, 6-4, was briefly filmed by a few attending fans and media.

“Four people in the crowd leaving the stadium revealed inappropriate flags and symbols and threatened security guards,” a spokesperson for organisers Tennis Australia told the newspapers.

“Victoria Police intervened and are continuing to question them. The comfort and safety of everyone is our priority and we work closely with security and authorities.”

Reporters have contacted Tennis Australia for comment and await a response from organisers.

The Footage posted and shared widely online showed at least one man on some steps holding a Russian flag with President Vladimir Putin’s face emblazoned across it.

Journalist Tumaini Carayol was one of those that captured a short video of the fans and their flag display.

Just took a walk around Melbourne Park after filing and a group of people were standing on the Rod Laver Arena steps, holding up a flag with Vladimir Putin’s face and chanting in support of Russia. pic.twitter.com/2p0LfkyVC3

Spectators have been banned from displaying Russian or Belarusian flags at the Grand Slam.

That ruling was handed down after Ukraine’s ambassador demanded action when they were seen among the crowd last week.

Since Russia’s invasion of Ukraine, Russian and Belarusian players compete under a neutral white flag as independents, as is the case at the Australian Open.

Melbourne Park security guards have now been supplied with pamphlets with a growing list of various prohibited Russian flags and symbols.

One of the fans was also seen to remove a jacket to show a t-shirt with the letter Z emblazoned on it.

The letter Z is associated with pro-war sentiment within Russia and among its supporters abroad.

Rublev has made his anti-war sentiments clear but it seems his match was the most appropriate staging ground for their display.

He is also hopeful of Wimbledon lifting their ban on Russian and Belarusian players.

“The last information that I heard was, like, maybe one week ago that the announcement will be in couple of weeks. We’re all waiting. Hopefully we’ll be able to play. I wish, I would like, and I would love to play,” said Rublev on Wednesday.