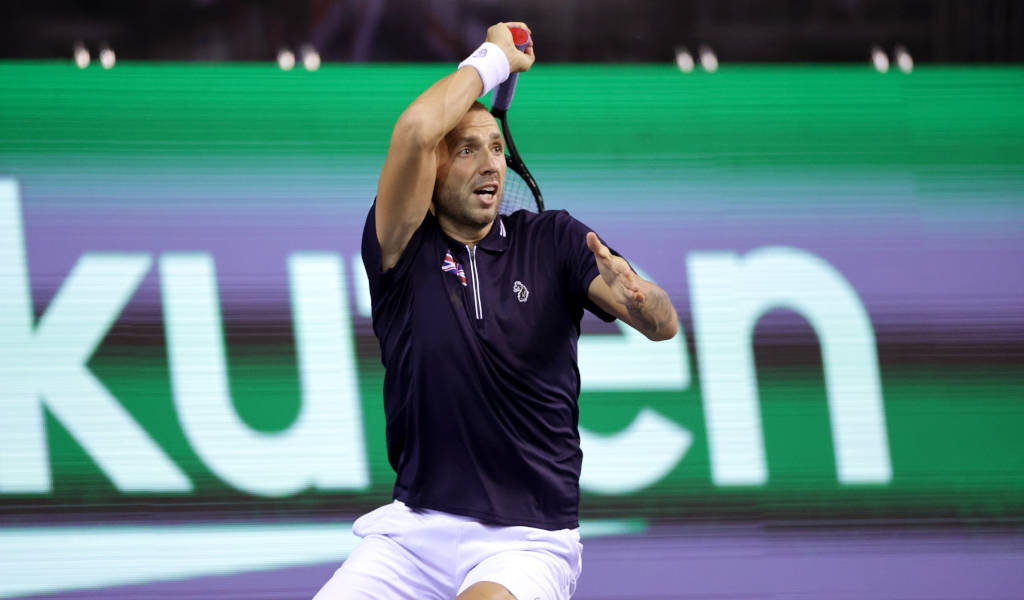 Dan Evans gave Britain the perfect start to their must-win Davis Cup clash against the Netherlands in Glasgow with a straight-sets victory over Tallon Griekspoor.

Wednesday’s narrow loss to the USA at the Emirates Arena left Leon Smith’s side almost certainly needing to win their remaining two group matches to book their place in the last-eight shootout in Malaga in November.

Evans, who lost a high-quality clash with the US’s Tommy Paul, was tested by Griekspoor on the very slow hard court but was the stronger in the big moments in a 6-4 6-4 win.

The Brit had to maintain his focus and wait for an opening with his Dutch opponent really dialled in on serve.

It was an important win for Evans, who has suffered a number of narrow losses in Davis Cup, and he said: “It’s an amazing atmosphere, I love playing in Britain, especially here in Glasgow. It was an amazing match. I’m just pumped to get through for everybody else.

“He served incredibly well. It’s sometimes frustrating. I thought I did well keeping calm and getting through.”

The start to the tie was again a sombre affair, with a minute’s silence before the national anthems and a lone piper providing the only background music.

According to the Daviscup.com report: “For long periods in the opener Evans was hanging in rallies as Griekspoor’s greater power allowed him to dictate. But having escaped a lengthy game seven without bring broken, the Briton promptly broke in the next game to lead 5-4 and, spurred on by a comment from the Dutch fans, served out a well-managed opener.

“Evans was warming to the task now, but it was clear he knew the stakes – the 32-year-old was left hopping in frustration when a net cord from the Dutchman dribbled over when a break point looked on the cards.

“Griekspoor remained a threat – the slow conditions allowed him to follow the ball into the net time and again, and he showed fine touch around the net – but a fizzing cross-court pass from Evans saw him down 0-40 at 3-3, the crucial break coughed up at the third attempt as the Briton arrowed a backhand winner down the line.”

All the British team spoke on Wednesday about how different they had found it from a normal Davis Cup atmosphere despite the efforts of the enthusiastic crowd, who again gave noisy backing.

Evans is ranked 23 places above Griekspoor but the Dutchman has climbed into the the top 50 this season on the back of a remarkable unbeaten run of 28 matches at the end of 2021 and beginning of 2022.

Griekspoor used his extra power, particularly on the forehand, to press Evans in a long eighth game but the British number two held firm and then took his opportunity in the next game.

He managed to keep Griekspoor at arm’s length, saving the only break point he faced in the second game of the second set, before breaking again in the seventh game and taking his third match point.