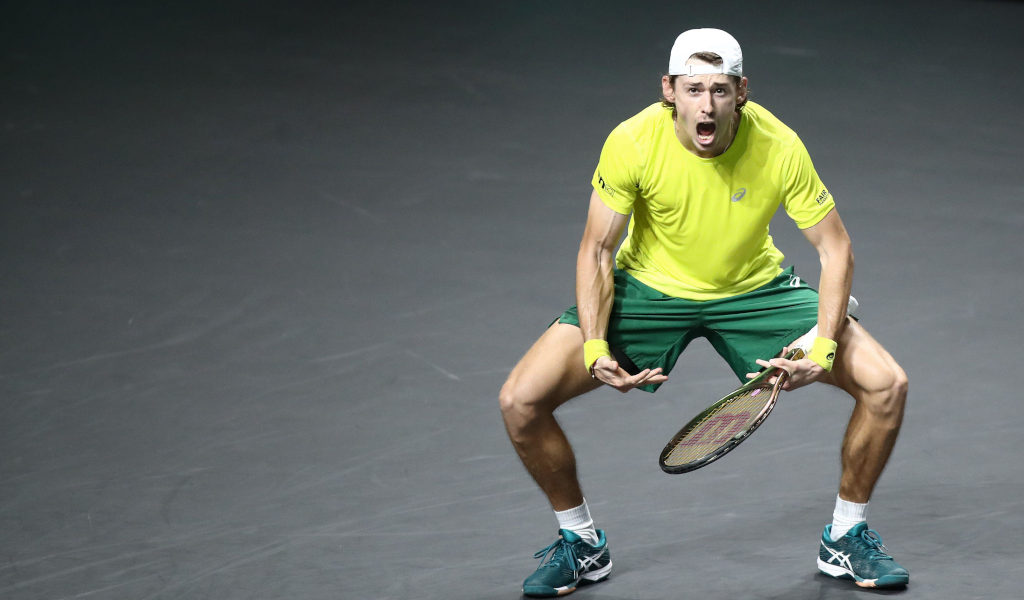 The Lleyton Hewitt skippered Aussies came back from a match behind, and later a set down in the deciding doubles match to triumph in the semi-final tie.

The pairing of Jordan Thompson and Max Purcell sealed the deal for Australia winning 6-7(3), 7-5, 6-4 against an accomplished doubles team in Nikola Mektic and Mate Pavic.

Playing bold aggressive tennis the Australians could barely contain themselves after the stunning triumph in Glasgow.

“There’s nothing ***** like it, mate,” said Purcell in his on-court interview. “Anything green and gold, there’s nothing like it.”

Thompson was a late replacement for Matt Ebden and captain Hewitt was delighted with how it all worked out for his side.

“We had a small injury concern for one of our players but I had no concerns about the chemistry of these two [Thompson and Purcell],” Hewitt said after the stirring win.

“It’s been a long time. We’re a very proud Davis Cup nation and I’m very proud of these guys. They deserve to be in the final and in with a chance of winning this thing.”

Alex de Minaur played a sensational match to defeat Marin Cilic 6-2, 6-2, to cancel out a win for Borna Coric over Thanasi Kokkinakis.

Sending down four double-faults in the opening game established an unwanted trend for Cincinnati Masters champion Cilic, who would surrender 10 points in total due to his wonky serving radar.

However, credit must go to the bustling De Minaur who took advantage of the misfing in stunning style.

De Minaur carried out his endless scurrying, dynamic hitting with seemingly boundless energy and his sheer will proved too much for Cilic.

Tellingly, four and half games into that singles tie, they had played 30 points on the Cilic serve while just nine were contested on De Minaur’s delivery.

The emerging star who has so often been able to carry Croatia over the line when it matters couldn’t do it this time and his team’s run is ended at the last four.

De Minaur continued his charge in what commentator Colin Fleming called ‘the performance of the week’, and was understandably thrilled afterwards.

“I’m just happy to give our country a chance,” said De Minaur. “Very happy with my performance. We play with passion, we play with pride and I know our doubles guys will leave it all out there.”