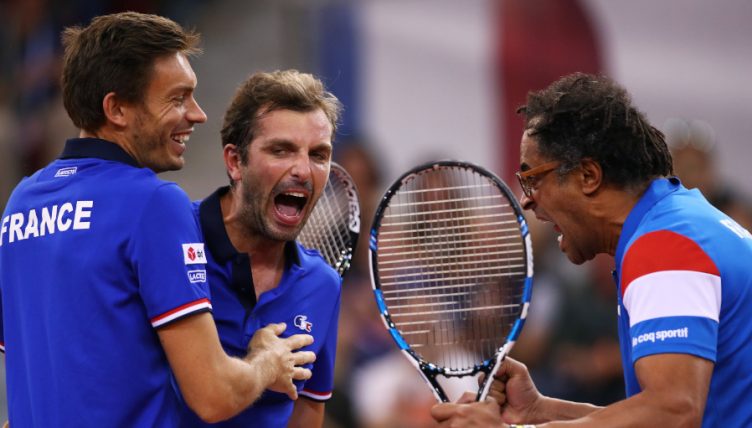 Defending champions France made it back-to-back Davis Cup finals as they secured an unassailable 3-0 lead over Spain on Saturday.

Having won the opening rubbers on Friday, captain Yannick Noah turned to Nicolas Mahut and Julien Benneteau for the doubles and the pair claimed a straight-sets win over Feliciano Lopez and Marcel Granollers.

After comfortably winning the opening two sets, France fought off resistance in the third before wrapping it up 6-0, 6-4, 7-6 (9-7).

Noah, who will retire at the end of this year and will be replaced by Benneteau as France captain, said: “This is the best I have seen from my team in three years. I didn’t have a beer for a week – I deserve my beer.”

They will meet either Croatia or the United States in the final with the former leading 2-1 ahead of Sunday’s reverse singles.

Croatia started Saturday with a 2-0 lead, but the Americans stormed back in the doubles thanks to Mike Bryan and Ryan Harrison

“Yeah, we were feeling pretty good, going up two sets to love,” Bryan said. “Had a break point early in the third. Felt like maybe we could have jumped on top of it and finished it, but they got loose.”

He added: “It was just a dog fight. Could have gone either way. Luckily I had a great partner in Harry. He stepped up there at the end, and he played great.”

Meanwhile, Great Britain will take a 2-1 lead into Sunday’s reverse singles after Jamie Murray and Dom Inglot came from a set down to win the doubles.

“We were fighting hard in the first couple of sets but couldn’t quite find a break,” Murray said. “We were so close to being two sets to love down, then we relaxed a bit and played really well in the last two sets.”

Great Britain need only one win on Sunday to secure their seeding for next year’s revamped Davis Cup.

Cameron Norrie will take on Istomin while Dan Evans will play against Jurabek Karimov in the final match of the weekend.