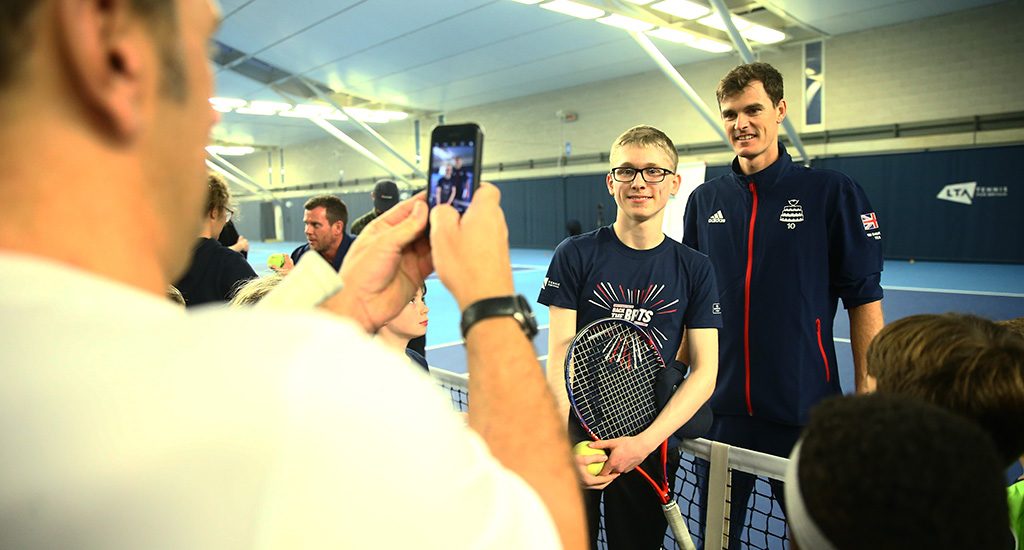 With the excitement growing around Great Britain’s Davis Cup team ahead of the finals in Madrid next week, GB’s stars took some time out to host a coaching session for 35 local kids with the LTA, at the National Tennis Centre in Roehampton. The team hopes that events like these – combined with their efforts in Madrid – will help inspire the next generation of tennis talent in the UK.

Jamie Murray and Neal Skupski were joined on court by British number one, Dan Evans, and GB Davis Cup Captain, Leon Smith, for a jam-packed hour of tennis games and drills with LTA coaches, giving the kids a chance to play with, and learn from, some of their GB tennis heroes.

With the team in first-match action next Wednesday, the kids took every opportunity to put them through their paces to make sure they are ready for the world cup of tennis.

British doubles number one and former Davis Cup champion, Jamie Murray, wasn’t afraid to get stuck in with all the games on court, saying: “Today has been fun, they (the kids) have been pretty energetic and there has been a great atmosphere on the court.

“It’s not something that we often get the chance to do and it’s been cool, I’ve really enjoyed it. I hope we will inspire kids to play tennis, that’s the fun part of what we can do. It’s a great sport, it’s a fun sport, and a sport for life that I think all people of all abilities can play it.”

Captain Leon Smith believes the team have an important role to play in encouraging young talent and is looking forward to the challenges in Madrid. “If we can inspire these young children into tennis and get them involved in the sport then that’s always a positive thing for us to be involved in.

“It’s a new format of the competition so we’re excited to see how it all works, there are 18 of the best teams in the world coming together for one week of competition and it’s going to be really exciting. We’re delighted to have a strong squad ourselves and we’ll be giving it everything for the country; we look forward to getting everyone’s support.”

Many of the kids who took part, including several disability players, had also previously been part of the LTA’s Tennis for Kids initiative, which was launched off the back of the team’s historic Davis Cup win in 2015.

The programme, aimed at 4-11-year-olds, encourages kids to get active and try tennis for the first time, in a way that is both fun and affordable. Since its launch, over 83,000 kids across the UK have been able to develop core tennis skills through the starter programme.

“It’s fantastic to see all the kids getting the opportunity to interact and practice their skills with some of the best players in the sport” said the LTA’s Senior Programmes Manager, Sam Richardson, who helped run the session with the team.

“Days like these will stay with them for the rest of their lives and I hope it inspires them to want to continue playing tennis as they grow older. Who knows, we might have the next Andy or Jamie Murray or Jo Konta here with us today!

“We want to give as many children as possible in the UK the opportunity to discover our sport and have exciting plans in the pipeline to further develop junior tennis across the country as we move into 2020 and beyond; there’s lots to come.”

At the finals in Madrid, Jamie, Neal and Dan will also be joined by former world number one and Wimbledon-champion, Andy Murray, and former Davis Cup winner, Kyle Edmund. The team will kick-start their campaign against the Netherlands on Wednesday 20th November, before taking on Kazakhstan in the final group stage match on Thursday 21st November. The winner of the group will then proceed to the quarter-final knockout round.

To keep up to date on how Great Britain’s Davis Cup team is getting on in Madrid and for all the behind the scenes action from the players, follow @LTA on Instagram, @LTA – Tennis For Britain on Facebook or @the_LTA on Twitter.

Inspired by the team? Discover more at www.lta.org.uk