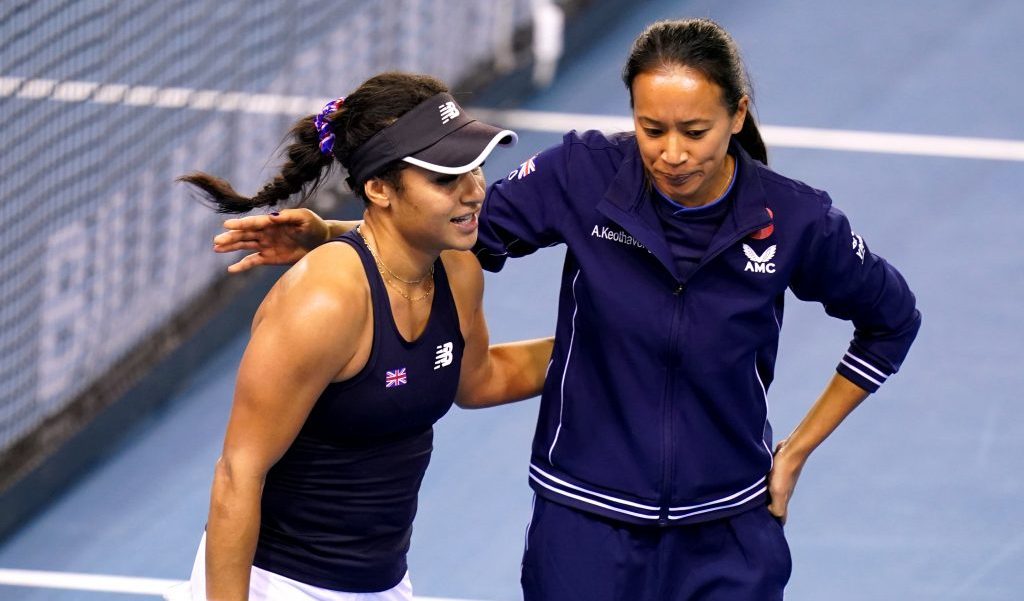 Great Britain fell agonisingly short of a fifth Billie Jean King Cup final appearance as victory in a deciding doubles tie-break in Glasgow sent Australia through to the trophy match.

Playing in their first semi-final for 41 years after Thursday’s remarkable whitewash of Spain, Anne Keothavong’s side had high hopes of emulating Sue Barker and Virginia Wade, who last led Britain to the final in 1981.

Heather Watson lost the opening rubber 6-4, 7-6 (7-3) to Storm Sanders but Harriet Dart followed up her victory over 13th-ranked Paula Badosa by upsetting world Ajla Tomljanovic 7-6 (7-3), 6-2 to take it to the wire.

Doubles duo Alicia Barnett and Olivia Nicholls have been the revelation of the week for the hosts on their international debut but they were unable to conjure a third victory, losing out 7-6 (7-1), 6-7 (5-7), (10-6) to the impressive Sanders and Sam Stosur.

Cheered on by the best crowd of the tournament at the Emirates Arena, Barnett and Nicholls had their chances, holding two set points at 6-5 in the opening set after fighting back from a break down.

Barnett was then broken serving for the second set but they battled through a tense tie-break – helped by some shocking misses from Stosur – to force a first-to-10-point decider.

While defeat will sting for the British team, they have hugely out-performed expectations and there should be optimism, especially if Emma Raducanu can get herself on an even keel next season, that this need not be a one-off.

Dart, in particular, will leave Glasgow believing she can elevate her ranking well above its current 98 having taken on three of the world’s biggest hitters and beaten two of them.

Dart took full advantage of a slow start by Tomljanovic, who sent Serena Williams into retirement at the US Open, picking up where she left off against Badosa and powering into a 5-2 lead.

She was unable to serve out the set and missed a set point at 5-4 but played much the better tie-break against her faltering opponent.

Dart had been on the front foot throughout and she continued to strike the ball with superb authority, wearing down Tomljanovic and clinching another standout victory.

Playing as No 1 in the absence of the injured Raducanu, Dart has relished the occasion, saying: “It’s a bit wild. Growing up, I dreamt of being on the team and representing my country. Honestly, it’s such an honour to be able to be here let alone playing as the number one player.

“I have just been really happy with the way I have been putting in good performances out there.”

Watson denied feeling the pressure of expectation against a player ranked more than 100 places lower in singles and instead said the early start to the match – Britain had previously played in the evening – affected her.

But, whatever the reason, it was clear from the start this was not the same Watson who had barely missed a ball in a 6-0, 6-2 pasting of Nuria Parrizas Diaz.

Sanders played well above her singles ranking of 237, using intelligent tactics to stop her opponent finding any rhythm.

She took a medical timeout at the end of the first set for treatment to her right hip area and initially appeared to be in some discomfort, but Watson missed a chance to move 3-0 ahead in the second and from there the Australian resumed her ascendancy.

“I’m really disappointed that I wasn’t able to get the result that I wanted today for the team, but I gave it my best,” said Watson. “It was still a good match.”