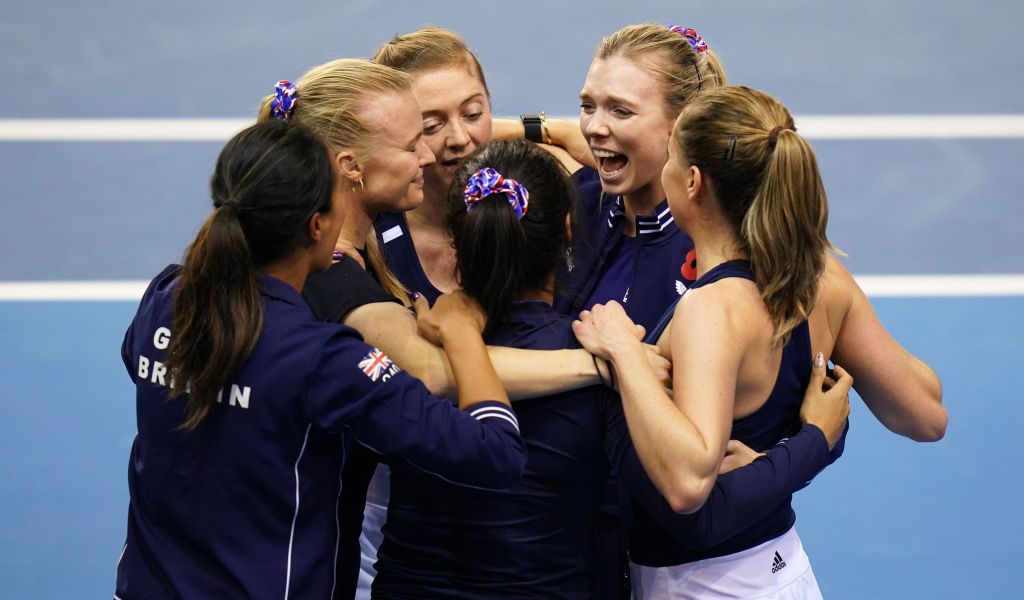 Great Britain captain Anne Keothavong was left pinching herself in disbelief after watching her players pull off a remarkable 3-0 victory over Spain in Glasgow to reach the semi-finals of the Billie Jean King Cup for the first time in 41 years.

Knowing following defeat by Kazakhstan on Tuesday that only a whitewash of the five-time champions would be good enough, Britain went into the tie at the Emirates Arena with seemingly little chance.

But Heather Watson and Harriet Dart overcame much higher-ranked opponents – the latter in tears after stunning 13th-ranked Paula Badosa – and rookies Alicia Barnett and Olivia Nicholls shrugged off the pressure of a winner-takes-all doubles rubber to defeat Aliona Bolsova and Rebeka Masarova.

The pair were late call-ups following Emma Raducanu’s withdrawal and had not been in anything remotely like this situation before but again played superbly to clinch a 7-6 (5) 6-2 victory.

“It was just wonderful to see everything unfold today,” said captain Keothavong. “I still can’t believe it. To beat Spain without dropping a set. But knowing that we had to win 3-0, and then the girls just smashing it by not dropping a set, it was just unreal.”

Britain last reached the semi-finals back in 1981, when Sue Barker and Virginia Wade carried them to the last of four finals in what was then known as Fed Cup, and have been in the competition’s doldrums for much of the intervening time, with this sort of result so far off their radar it was not even a dream.

Keothavong’s side arguably should not even be in the 12-team tournament having lost a qualifier to the Czech Republic in April but they were given a wild card when Britain stepped in to host the event and have spectacularly made the most of it.

They now move through to a semi-final clash against Australia, where they should legitimately feel they have a strong chance of victory.

“The sky’s the limit after what we have shown so far,” said Nicholls. “We were definitely underdogs in this group. No doubt about it.

“Both the singles girls, Harriet and Heather, getting unbelievable wins today. We have shown what we can do on the doubles court at well. I don’t see there’s any players or teams here that we shouldn’t walk onto court thinking we can’t beat. We will just keep going.”

A bigger and noisier crowd certainly played their part, and 600 tickets priced at £20 each will be made available for Saturday’s semi-final.

Among four exceptional performances, credit especially goes to Dart, who overcame a ranking gap of 85 places in a 6-3 6-4 victory over big-hitting Badosa.

Dart fought back tears in her on-court interview as she said: “It’s so awesome being here in Britain and being able to host this event. I’m just so happy to keep this one alive.”

The 26-year-old has beaten a number of highly ranked players this season and she used that confidence along with the momentum generated by Watson’s impeccable 6-0 6-2 success against Nuria Parrizas Diaz.

“Every time I step out and they call my name and they call Great Britain, I get goose bumps,” said Dart. “You realise it’s just so much more than you. It’s huge. For me, playing Billie Jean King Cup is one of the greatest things, for sure, in my career.”

Keothavong opted to play Watson rather than Katie Boulter, who produced an error-strewn display on Tuesday, in the opening rubber and the 30-year-old fully justified that decision with a sparkling display against a player ranked 61 places higher.

“I had so much fun out there,” said Watson. “I was smiling over at my team a lot. I loved every second out there and I think my tennis showed that. I think I played really well.”

Australia became the first team to book their place in the last four with a 3-0 victory over Belgium.

Belgian number one Elise Mertens, who dashed to Glasgow after winning the doubles title at the WTA Finals in Texas on Monday evening, retired during the third set of her clash against Ajla Tomljanovic with a shoulder injury, prompting captain Johan Van Herck to hit out at the scheduling.

“We were not helped by the situation,” he said. “What happened with Elise, I don’t think it’s very correct. It’s something where I think we, as a small country, have to pay a price for not being the Czech Republic that starts today or the US that can play in the evening.”

Canada will take on Switzerland on Friday for a place in the semi-finals after beating Italy 3-0, with Leylah Fernandez claiming a 6-0 6-0 victory over Martina Trevisan, while the Czechs defeated Poland 2-1 to set up the same scenario against the USA.