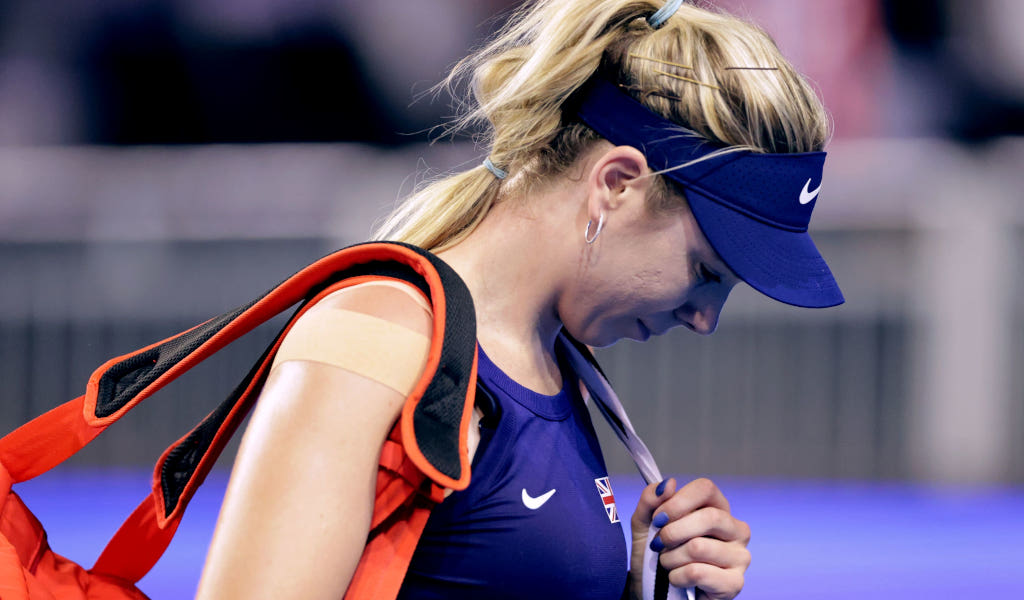 Great Britain clung onto hopes of progressing to the semi-finals of the Billie Jean King Cup finals after an opening 2-1 defeat by Kazakhstan in Glasgow.

Britain were given a place as hosts after the Lawn Tennis Association stepped in to stage the event at the Emirates Arena and, especially without the injured Emma Raducanu, lack the strength of nearly all the other teams.

They spoke with confidence on Monday about their chances of using home advantage to spring a surprise but the tie was over after the singles, with Katie Boulter losing 4-6 6-3 6-2 to the feisty Yulia Putintseva and Harriet Dart beaten 6-1 6-4 by Wimbledon champion Elena Rybakina.

The day at least ended on a positive note, with debutants Alicia Barnett and Olivia Nicholls producing a fine performance to defeat Rybakina and world doubles number 12 Anna Danilina 7-5 6-3.

That could prove important but Britain’s chances now depend on Spain beating Kazakhstan on Wednesday and the hosts defeating the Spaniards the following day.

Look at what it means! 🇬🇧

Captain Anne Keothavong said: “We are playing in front of a home crowd. There is a lot of pride on the line. So, regardless, what will be will be tomorrow, and we will prepare in the right way for Spain.”

The Kazakhs could even claim the noisiest supporters, with their loyal band of followers out-performing the sparse British crowd.

Keothavong added: “Ideally you’d like more people to come and support, because there is some great tennis on offer. How many opportunities do you get to see a Wimbledon champion and the British players play on your doorstep?”

Given the difficulty of Dart’s assignment, Britain’s hopes relied on Boulter being able to spring an upset against Putintseva.

Although Boulter is ranked nearly 80 places lower at 130, she has been a consistent big-match performer with an excellent record in the competition – her only two losses have both come against Putintseva.

The 26-year-old from Leicestershire made an excellent start, breaking her opponent to love in her first two service games, but she lost her way in the second set and a 4-0 deficit in the decider proved far too big a mountain to climb.

She said: “I came out swinging and she had obviously come out with a game plan which slightly suited me, I think, initially.

“She then completely changed her game plan and I started to allow her to play the way that she (wanted), and she manoeuvred me around the court instead of me taking the lead.”

Boulter took a medical time-out after three games of the decider for treatment to her left calf but shrugged off any concerns about being fit for Thursday.

Rybakina has been up and down since winning her maiden grand slam title at the All England Club but possesses one of the most powerful games on tour, including serving at more than 120 miles per hour, and was always likely to have too much for 95th-ranked Dart.

Dart dug in well from a set and 2-0 down and had two chances to lead 5-4 in the second but Rybakina won four points in a row and then served out the victory.

“She’s definitely one of the few players on the tour that can kind of take the match out of your hands,” said Dart.

“I think the second set I was right in there and there were a couple of mistakes that I definitely need to clean up on. But for sure it’s all encouraging.”

Barnett and Nicholls’ breakthrough season earned them a late call-up following Raducanu’s withdrawal and they showed the value of picking an established doubles pair.

They rated the victory the best of their career, with Nicholls saying: “It’s definitely our best-ever win. Top-20 doubles player and a Wimbledon champion. I felt we really brought our best game out there today.”