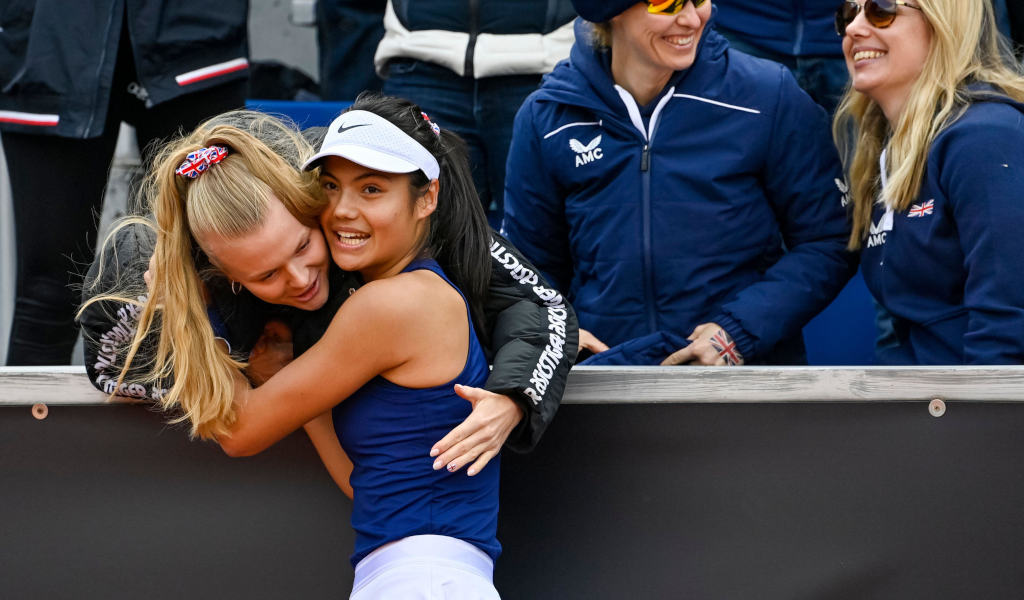 Emma Raducanu savoured a landmark win as she drew Great Britain level with the Czech Republic at the end of the first day of their Billie Jean King Cup tie in Prague.

The US Open champion’s clash with 50th-ranked Tereza Martincova was not just her senior competitive debut for Britain but also her first professional match on clay – another example of the remarkable career trajectory the 19-year-old has been on.

The pressure was on Raducanu after Harriet Dart’s 55-minute 6-1 6-0 thrashing by Marketa Vondrousova and she rose to the challenge impressively, claiming a 7-5 7-5 victory.

It was just Raducanu’s third victory of the season – with Martincova the highest-ranked player she has beaten since New York – and was particularly satisfying after a series of matches in which she has failed to build on strong starts.

“This win definitely meant a lot to me because this year I’ve won a lot of first sets, I’ve been leading matches, and to actually close it out in two sets gave me a lot of confidence,” said the 19-year-old.

“And just for the team, we’re still in this, we’re fighting, it’s all to play for tomorrow. And it being my first match on clay for four years, it’s pretty insane. I don’t know how it’s been that long.”

Raducanu last played on the surface back in 2018 in French Open juniors but this performance was notable for the way she learned as she went along, saving a set point at 4-5 in the opener and then fighting back from 1-4 in the second.

“What pleased me the most was the adapting I had to do because the conditions changed a lot, it was sunny and then cold and then a lot of wind picked up,” she said.

“Also on clay there are many bad bounces so I was struggling a lot with that and had to find a way to adapt. And I’m very pleased with the way that I managed to up my intensity after trailing 1-4 in the second set and overcome that dip.”

The victory was essential for Britain if they are to cause a major upset against the perennial champions, with Dart’s one-sided loss to former French Open finalist Vondrousova a demonstration of the size of their task.

Captain Anne Keothavong said: “First and foremost I thought it was a really gutsy performance from Emma and for her to be able to close that match in straight sets it took a huge effort.

Three points are needed for victory and, first up on Saturday, Raducanu will try to earn her second against Vondrousova in what is a hugely intriguing match.

Raducanu defeated the 22-year-old comfortably in the second round of Wimbledon last year when she was an unknown quantity on the world stage but this is not just Vondrousova’s best surface, the tie is also being played at the Cesky club where she grew up.

“I feel like grass and clay are the polar opposites so it is going to be a different match,” said Raducanu.

“It’s her home surface, her home match, but I’m looking forward to it. It’s going to be a big challenge and probably the toughest opponent that I’m going to play on clay early days so it will be a great test for me to see where I’m at and build for the rest of the season.

“Every match I’m taking as a learning experience but the team are so fired up for tomorrow.”

Both captains have the option of changing their teams and an intriguing possibility for Keothavong could be 20-year-old Sonay Kartal, who has been in brilliant form at lower-level events over the last six months.