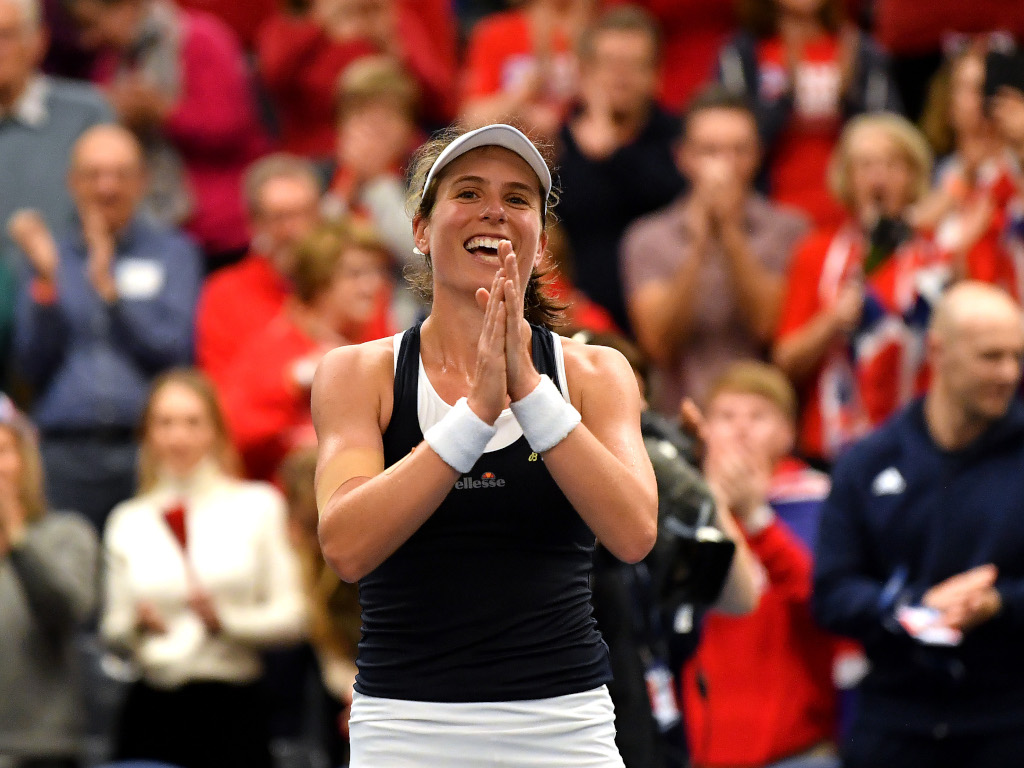 Great Britain maintained their perfect Fed Cup World Group II play-off record as they recorded a 3-0 win over Greece, but Maria Sakkari was left fuming by the officiating.

Katie Boulter gave the hosts the lead in the opening rubber in Bath as she beat Valentini Grammatikopoulou 6-3, 4-6, 6-3.

British No 2 Boulter found herself 2-0 down in the decider against the world No 171, but won six of the final seven games to put Great Britain on their way.

Johanna Konta then sealed the deal with a 4-6, 6-2, 6-3 defeat of Sakkari in two hours and 42 minutes before Katie Swan and Harriet Dart and teamed up to win the doubles and give Great Britain a 3-0 win.

British No 1 Konta claimed the crucial break in game eight of the decider, but both players were far from happy with the officials.

“This is unacceptable. They were making a lot of mistakes,” Sakkari is quoted as saying by BBC. “We cannot have amateurs.”

She added: “Because we have many players in the top 100, we are playing with poor balls, nine and 11 change, and with line umpires that have never worked in their life. That’s what I want to say.

“There were mistakes for both sides, I am not saying that they always do mistakes only for us, but of course there are more mistakes for our side. But there were quite a lot of mistakes.”

Konta was a little more sympathetic.

“I think it was quite tough at both our ends but when it’s such a tough match like that – so many heightened emotions – the line judges will feel the same kind of pressure, the same kind of stress,” she said.

“Everybody’s human, but it was definitely a hard thing to contend with.”

“The line-calling today didn’t affect the outcome of the matches. There were tight line calls. Some of the bad line calls went both ways, but that’s tennis,” she said.

“There was a lot of tension out there. But my brother’s an official so I’m sympathetic to officials these days. It’s not easy out there for them too.”

Great Britain will face Hungary for top spot in Pool A on Friday after the Hungarians beat Slovenia 3-0 with Dalma Galfi and Anna Bonda winning the singles rubbers before Reka-Luca Jani and Adrienn Nagy completed the clean sweep.

Croatia, meanwhile, secured a 2-1 win over Georgia 2-1 and will face Serbia to decide who wins Pool B.

Ana Konjuh won her singles match and then teamed up with Daria Jurak to win it for Croatia while Serbia eased to a 3-0 win over Turkey.