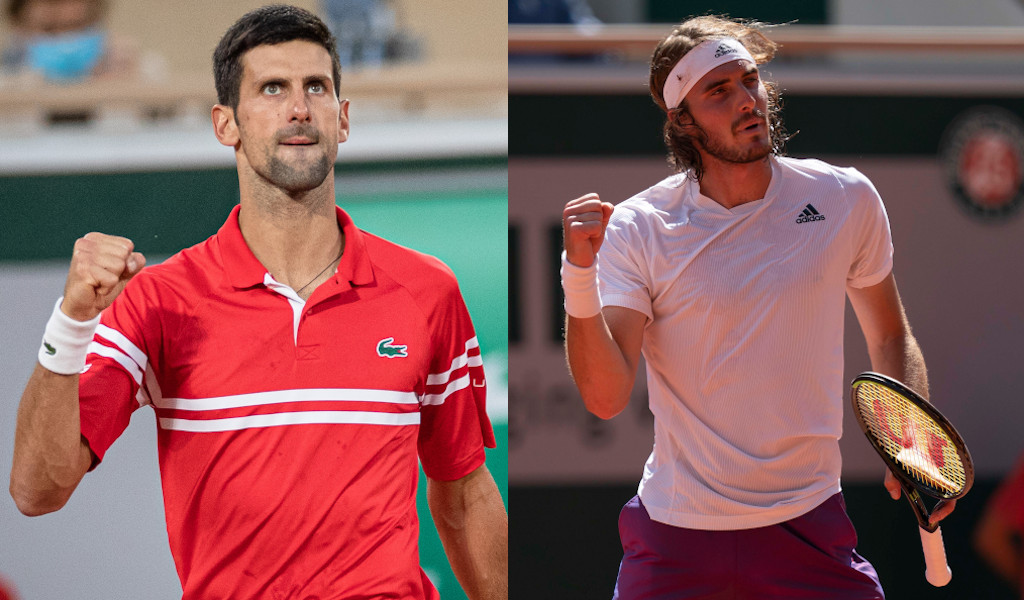 Novak Djokovic will be looking to win a 19th Grand Slam title and a second Coupe des Mousquetaires when he takes on first-time major finalist Stefanos Tsitsipas in the 2021 French Open men’s final. Will the world No 1’s experience trump the Greek’s youthful exuberance at Roland Garros on Sunday?

Djokovic secured his place in the Court Philippe Chatrier showpiece match after overcoming 13-time French Open champion Rafael Nadal in an epic semi-final. It will be his 29th Grand Slam final and he will be looking to move within one major trophy of Nadal and Roger Federer’s record 20 Grand Slams. Should he emerge victories, he will also complete his second Career Grand Slam.

Tsitsipas became the first Greek, man or woman, to reach a Grand Slam final when he beat Alexander Zverev in the semi-final, but he will be hoping to get the monkey off his back by going all the way and win a maiden major.

The 22-year-old’s Grand Slam progress has been impressive as he has reached two Australian Open semi-finals and one French Open last four before this year.

Novak Djokovic’s clay-court season got off to a patchy start as he suffered surprise defeats to Dan Evans and Aslan Karatsev in Monte-Carlo and Belgrade respectively. However, it picked up after that as he finished runner-up to Rafael Nadal at the Italian Open before winning his second Serbia Open title.

As for Roland Garros, after comfortable wins in the first three rounds he was forced to work really hard for his next three victories as he had to come from two sets to love down to avoid a massive upset at the hands of Lorenzo Musetti in the fourth round while he also needed four sets to beat Matteo Berrettini in the quarter-final.

Stefanos Tsitsipas has enjoyed a glorious run on clay this year as he won the Monte-Carlo Masters, finished runner-up to Nadal at the Barcelona Open, lost in the quarter-finals in Madrid and Rome before winning the Lyon Open.

Although he dropped a set against John Isner in the third round, the Greek looked comfortable in most of his matches. After brushing aside second seed Daniil Medvedev in the quarter-final, he was finally tested by Alexander Zverev in the last four, holding off the German 6-3, 6-3, 4-6, 4-6, 6-3.

If you are looking for the head-to-head on clay, then it is very lopsided with Djokovic winning at Rome 2021, Roland Garros 2020 and Madrid 2019.

“We played an epic five-setter last year in the semis here. I know it’s going to be another tough one. I’m hoping I can recharge my batteries as much as I can because I’m going to need some power and energy for that one.” – Novak Djokovic

“It was just exhausting. I’m proud of myself. I’m grateful for every single match that I get to play. I’m obviously just blessed to have the opportunity to play against the best and test myself.” Stefanos Tsitsipas

Unsurprisingly, Novak Djokovic is the outright favourite to win a 19th Grand Slam title on Sunday with Planetsportbet.com putting him at 2/7 to lift the Coupe des Mousquetaires and complete a second Career Grand Slam.

You can get Tsitsipas at 5/2 to win his maiden Grand Slam.

Djokovic has dropped at least one set in his last three matches and he is 9/2 to win a five-set match and 5/2 to win four. However, many first-time Grand Slam finalists often struggle and the Serbian is 7/4 to sweep to a three-set win.

If you fancy Tsitsipas to cause an upset then you can get him 7/1 to win a four-setter.

He may have spent more hours on the court and it will be interesting to see if he is fully recovered come Sunday, but Novak Djokovic is the overwhelming favourite to win the French Open.

The world No 1 has come up with answers for every question that has been asked at Roland Garros this year.

If Tsitsipas wants to have any chance of winning he will need to catch Djokovic cold with a blistering start, but sadly often first-time Grand Slam finalists struggle to get going and before they know it the occasion is over.

Djokovic is likely to be the man to hold aloft the Coupe des Mousquetaires on Sunday evening.